ADB slammed in official investigation of Cambodian railway resettlement, ordered by its Board to repair damage done

In its most damning investigation to date, ADB’s internal watchdog, the Compliance Review Panel (CRP), found that the regional bank failed to comply with its policies and procedures regarding the resettlement of more than 4000 families displaced by its Railway Rehabilitation Project in Cambodia. 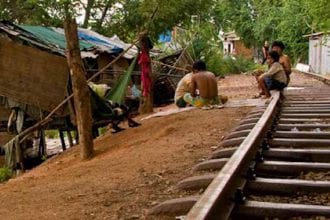 (Manila / Phnom Penh) – The Asian Development Bank (ADB) must undergo “a mind shift” in the way it treats people impacted by its projects, according to a scathing investigation report released today.

In its most damning investigation to date, ADB’s internal watchdog, the Compliance Review Panel (CRP), found that the regional bank failed to comply with its policies and procedures regarding the resettlement of more than 4000 families displaced by its Railway Rehabilitation Project in Cambodia. The policy breaches left a substantial number of affected households worse off and impoverished, the CRP found.

The Panel’s report followed a 17-month investigation into allegations of gross negligence by ADB made in a complaint filed on behalf of affected families by Inclusive Development International (IDI) and Equitable Cambodia. On January 31st ADB’s Board of Directors approved the Panel’s findings and recommendations.

The Panel found that families affected by the Railway project “suffered loss of property, livelihoods, and incomes, and as a result have borne a disproportionate cost and burden of the development efforts funded by ADB.”

According to the Panel, ADB’s “inadequate attention to addressing the resettlement, public communications and disclosure requirements of its own policies…has led to significant yet avoidable adverse social impact on mostly poor and vulnerable people.”

The Panel emphasized: “the need for an urgent, firm, and clear message to ADB Management that resettlement, environmental, and public disclosure issues should be taken seriously and accorded the priority consideration they deserve.”  It found that in this case, as in other cases that it had reviewed, these issues were treated by ADB as “mere add-ons.”

The Panel concluded that: “ADB operational, sectoral, and regional staff must undergo a mind shift in the treatment of resettlement, environment, and public disclosure and consultation. Their perspective must be based on the recognition already existing in ADB’s safeguard policies that involuntary resettlement is a development opportunity, intrinsic to achieving the developmental goals of projects.”

The Panel made a number of recommendations for remedies, including establishing a $3 – $4 million ‘compensation deficit payment scheme’; improving facilities at resettlement sites; extending and expanding the income restoration program; establishing a debt workout scheme for highly indebted households; improving the functioning of the grievance redress mechanism; capacity-building for the Cambodian authorities responsible for resettlement; and adopting specific safeguards for the development of a freight facility which respects the land rights of families in the “Samrong Estate” area.

The affected communities who brought the complaint, along with Cambodian and international civil society organizations that have been monitoring the project, welcomed the CRP’s report and the Board’s decision.

Eang Vuthy, Executive Director of Equitable Cambodia, said: “This investigation report is a vindication of years of struggle.  While it is very frustrating that it took this long for ADB to accept responsibility, we are optimistic that the bank is now required by its Board of Directors to solve the many problems faced by affected communities.”

Since 2010, multiple, credible, well-documented NGO reports were provided to ADB, along with hundreds of complaints from affected people – all of which showed how people were impoverished after being forcibly resettled without provision of their due entitlements under ADB’s resettlement policy. ADB largely chose to ignore the NGO reports and failed to:

After more than two years of sustained efforts by NGOs to prompt ADB to accept the evidence of harms and act commensurately, in 2012, ADB agreed to appoint renowned resettlement expert Professor Michael Cernea to conduct an independent examination of the situation. In his report, Monitoring of Population Resettlement in Cambodia’s Railway Rehabilitation Project: Current Status, Strengths, Weaknesses, and Recommendation, Cernea was highly critical of the resettlement process and confirmed that affected people had been left worse off.  ADB, however, yielded to pressure from the Cambodian government and suppressed the report due to its unfavorable findings. Upon an appeal by NGOs, the President approved the disclosure of only the report’s recommendations, stating that “the harm that would result from the disclosure of the entire Report would be substantial, immediate, and likely irreparable, and outweighs the benefits of disclosure.”

More than a year after Cernea made his recommendations, there remains no action plan to implement them and harms to affected people have continued to mount.

David Pred, Managing Director of IDI, said:  “It is an outrage that ADB failed to act all these years while people fell into a spiral of debt and poverty after the resettlement plans it approved turned out to be disastrous.”

At its lowest point, not long after an NGO report providing extensive evidence of harms was published, the ADB produced and released a public relations video extolling the virtues of the resettlement process.

“If the ADB had put half the energy into ensuring a fair and humane resettlement process as it put into in its deceptive public relations campaign, it would not have this mess to clean up today,” Pred said.

Natalie Bugalski, Legal Director at IDI, commented:  “It’s a relief to see the Board finally rein in ADB Management and insist that the railway project be brought into compliance, but the devil is in the detail. The ADB must use all resources at its disposal to ensure that displaced families are fully compensated for all their losses and rehabilitated to their previous living conditions or better.”

“Compliance also means providing acceptable resettlement choices to those still living in precarious conditions along the railway who refuse to be impoverished by moving to a site more than 20 kilometers away from their livelihoods,” she added.

Families remaining along the railway in the Toul Sangke neighborhood of Phnom Penh have asked to be provided with resettlement plots with secure tenure at the Stung Meanchey site close to the city. The site was included as one of three options in the original 2006 Resettlement Plan and then dropped because it was deemed by the government to be too expensive.

Rayyan Hassan, Executive Director of NGO Forum on ADB said:  “Our network will be following this case closely to ensure that ADB delivers a robust remedial action plan and implements it effectively.  ADB must heed the CRP’s call for a cultural shift within the institution so that it starts taking safeguards seriously and finally puts people first.”

Ee Sarom, Representative of Sahmakum Teang Tnaut, summed up: “This is ADB’s opportunity to demonstrate to the Cambodian people whether it is here to alleviate poverty or to create it.”

The complaint, CRP report and Board decision are available at the following link:

Additional information about the Railway project is available at: