Beginning in 2012, Inclusive Development International supported more than 4000 households that were involuntarily resettled to make way for the rehabilitation of Cambodia’s railway system. The resettled families experienced severe hardships, including unmanageable indebtedness, loss of income and lack of access to basic services, as they were made to bear the externalized costs of this major infrastructure project. The Rehabilitation of the Railway in Cambodia Project was financed primarily by the Asian Development Bank (ADB) through a USD 84 million concessional loan and the Australian Agency for International Development (AusAID), which contributed USD 23 million in aid. IDI supported the communities to advocate for the full respect of their rights under ADB safeguard policies, Cambodian law and international human rights law. 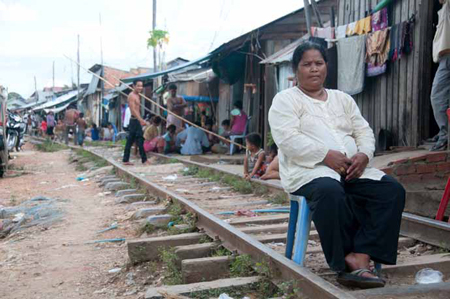 The Cambodian Government is bound to comply with ADB’s Policy on Involuntary Resettlement in relation to the more than 4000 families whose homes and small businesses are in the path of the rail lines and planned railway stations. The central principle of the policy is to provide sufficient compensation and assistance to ensure that displaced people are made at least as well-off after resettlement as compared to their previous living standards, with poor and vulnerable people supported so that their lives are improved. The Government is also bound by its international law obligations to ensure that it fully respects and protects the human rights of these families. It is obliged to use development projects such as this as an opportunity to improve the standard of living of affected people who were previously living in sub-standard conditions. This obligation includes guaranteeing that people have access to adequate housing, including all basic services and facilities, upon resettlement. As financiers of the project, the ADB and the Australian Government have a duty to monitor, supervise and support the resettlement process to ensure compliance with the policy and human rights obligations. 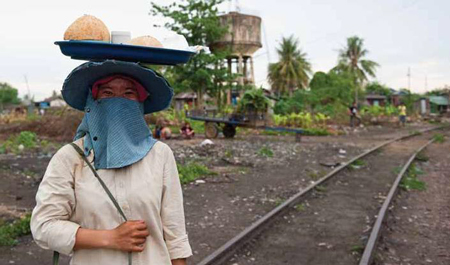 The reality, however, is that the Cambodian Government, the ADB and AusAID, routinely ignored the policy and legal obligations, as well as the warnings and evidence provided by affected communities and NGOs. As a result of these transgressions, many resettled families faced destitution. The report, DERAILED, published by NGO Bridges Across Borders Cambodia (now Equitable Cambodia) in February 2012, which was authored by IDI Legal Director Natalie Bugalski, found that affected families faced threats and intimidation during the resettlement process and that compensation amounts were well below the cost of a basic adequate house in Cambodia. Some of the resettlement sites were too far away from former residences, urban centers and livelihood opportunities. This economic displacement of resettled families led to a drop in household incomes, exacerbating the financial stress caused by the payment of inadequate compensation. Promised income restoration support programs only commenced months after resettlement took place and were piecemeal and ineffective. Families were forced to assume unmanageable debt burdens in order to cope with their displacement and they fear losing their plots of land at resettlement sites to creditors as a result. Many people have said that despite being aware of the risks of indebtedness they felt they had no choice but to borrow to meet the basic needs of their families including food.

On October 4, 2012, IDI and Equitable Cambodia submitted a complaint to the Australian Human Rights Commission (AHRC) on behalf of 30 affected families.  The extra-territorial  complaint alleges that the Australian Government failed to uphold its international human rights obligations by providing significant funding to the railway project without taking sufficient measures to safeguard against breaches of human rights.

In addition to the direct reparations for breaches of human rights of affected persons, the complaint calls upon AusAID to adopt human rights safeguard policies and practices including a requirement to conduct human rights impact assessments for all projects to which it is considering providing support. 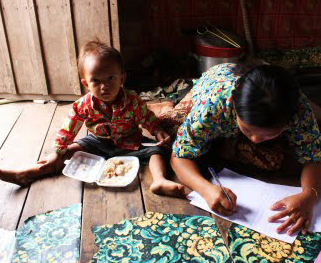 On August 28, 2012, IDI submitted a request for investigation of the resettlement process to the Compliance Review Panel (CRP), the ADB’s internal accountability mechanism, on behalf of affected families who have asked IDI to represent them through the process.

The complaint describes a litany of problems and non-compliance with the resettlement process that have inflicted hardships on hundreds of poor families. It calls for a number of remedies from the ADB including reimbursement for the actual costs of replacing lost assets, at least enough compensation to build an adequate home and meet basic needs, debt relief, adequate basic services at the relocation sites, and support to get their children back into school.   The complaint was registered by CRP on September 4, 2012.

After a 17-month investigation, the CRP issued a scathing report, which found that the ADB failed to comply with its policies and procedures, leaving a substantial number of affected households worse off and impoverished.  The Panel found that families affected by the Railway project “suffered loss of property, livelihoods, and incomes, and as a result have borne a disproportionate cost and burden of the development efforts funded by ADB.”  According to the Panel, ADB’s “inadequate attention to addressing the resettlement, public communications and disclosure requirements of its own policies…has led to significant yet avoidable adverse social impact on mostly poor and vulnerable people.”

The Panel emphasized: “the need for an urgent, firm, and clear message to ADB Management that resettlement, environmental, and public disclosure issues should be taken seriously and accorded the priority consideration they deserve.”  It found that in this case, as in other cases that it had reviewed, these issued were treated by ADB as “mere add-ons.” The Panel concluded that: “ADB operational, sectoral, and regional staff must undergo a mind shift in the treatment of resettlement, environment, and public disclosure and consultation. Their perspective must be based on the recognition already existing in ADB’s safeguard policies that involuntary resettlement is a development opportunity, intrinsic to achieving the developmental goals of projects.”

The Panel made a number of recommendations for remedies, including establishing a $3 – $4 million ‘compensation deficit payment scheme’; improving facilities at resettlement sites; extending and expanding the income restoration program; establishing of a debt workout scheme for highly indebted households; improving the functioning of the grievance redress mechanism; capacity-building for the Cambodian authorities responsible for resettlement; and adopting specific safeguards for the development of a freight facility which respects the land rights of families in the “Samrong Estate” area.

On January 30, 2014, ADB’s Board of Directors approved the Panel’s findings and slightly modified recommendations.

IDI, Equitable Cambodia and the affected communities who brought the complaint welcomed the CRP’s report and the Board’s decision and have called upon ADB Management to develop a robust remedial action plan to operationalize the decision.

According to the CRP’s monitoring, as of 2019, the most of the recommendations have been satisfactorily implemented, including the delivery of remedial compensation, improvements to infrastructure and facilities at resettlement sites, and an enhanced income restoration program that has increased the average incomes of resettlement households by 50%.

ADB Management’s Action Plan to Implement the Board Decision

Watch this video to hear directly from the affected people:

We can’t ignore Cambodia’s railroaded poor, by Natalie Bugalski, May 14, 2014, The Age

ADB waters down plans to amend mistakes in Cambodia, The Cambodia Daily, February 10, 2014

Joint Statement:  ADB slammed in official investigation of Cambodia railway resettlement, ordered by Board to repair the damage done

Remedy Derailed:  Briefing Note on the Status of Remedial Actions in the Rehabilitation of the Cambodian Railway Project (April 2016)

End of the Line:  Impacts of Resettlement Under the Railway Project in Phnom Penh, Sahmakum Teang Tnaut, May 2013

DERAILED: A study on the resettlement process and impacts of the rehabilitation of Cambodia’s railway, Bridges Across Borders Cambodia, February 2012