A massive oil pipeline running through the heart of East Africa would displace tens of thousands of people, endanger the critical ecosystems of the Lake Victoria basin area and tip the world closer to a climate catastrophe, but Inclusive Development International is working with a coalition of local, regional and international organizations to stop it.

The project has already caused large-scale displacement of local communities and poses grave risks to protected environments, water sources and wetlands in both Uganda and Tanzania, including the Lake Victoria basin, which millions of people rely upon for drinking water and food production.

Not only will this massive pipeline adversely impact local communities – displacing thousands of families from their farms, but it will rip through some of the world’s most important elephant, lion and chimpanzee nature reserves. There is also concern that the pipeline is a harbinger for the opening up of critical ecosystems, such as Murchison Falls National Park, to oil extraction.

And of course, yet another fossil fuel project of this scale will increase the severity of the climate emergency.

Despite the efforts of Total CEO Patrick Pouyanné to paint his company as a climate leader, this project alone will enable the extraction and transport of oil from northern Uganda and potentially the Democratic Republic of Congo, that would generate over 34 million tons of CO2 emissions each year.

Local communities have been doing all they can to resist the pipeline and have built a coalition of local and international organizations to support their cause.

Inclusive Development International is helping to focus pressure on the financial institutions and insurance companies that are backing or are considering backing this Total disaster.

To help stop the pipeline and the oil drilling projects in the Lake Albert basin that the pipeline will enable, Inclusive Development International has been focusing on stopping the flow of money to the project.

In March 2020, we mobilized more than 100 civil society organizations from Africa and around the world with an open letter to African Development Bank President Akinwumi Adesina urging the bank not to finance this dangerous project. The following month, the bank issued a statement distancing itself from the project and emphasizing its commitment to renewable energy.

We have engaged with potential EACOP project financiers and insurers, several export credit agencies, and regulatory bodies in China, to put them on notice that the environmental, human rights and reputational risks of backing this project are too high.

In February 2021, we worked with BankTrack to mobilize 263 organizations around the world to send a letter to Standard Bank, SMBC and ICBC and 22 of the world’s largest commercial banks, urging them to publicly rule out supporting EACOP in any way.

At the same time, we launched a new campaign hub, StopEACOP.net, to serve as a public resource for organizations in the #StopEACOP Alliance to share news and alerts about the project, and promote targeted actions that members of the public can take to support the campaign.

In October 2021, we supported local community associations representing thousands of individuals directly affected by the oil projects to file a groundbreaking complaint to the IFC’s Compliance Advisor Ombudsman (CAO). The complaint detailed how IFC’s client, a Kenyan financial services firm called Britam, intends to provide insurance for the EACOP and associated oil refinery. The CAO ultimately could not accept the complaint because Britam has not yet provided insurance to the oil projects. Nonetheless, the complaint served as a powerful preemptive strategy, prompting IFC to use its leverage with Britam – a major player in the local insurance sector – to urge it not to underwrite the project. By filing the complaint, Inclusive Development International and our local partners sent a strong message to IFC, Britam, and other prospective insurers about the risks of the EACOP and many ways in which it fails to conform with the IFC Performance Standards. If Britam does move forward with insurance for the pipeline, Inclusive Development International and the complainants are prepared to re-file the complaint to the CAO.

We also ramped up pressure on the insurance sector, compiling a “checklist” of likely insurers for the pipeline and working with partners to launch an email action targeting insurance company CEOs. As a result of our engagement, more than 20 major insurers have publicly committed not to support EACOP, citing climate and biodiversity concerns.

Approximately 1.7 billion barrels of recoverable oil have been discovered in the Albertine Graben, the basin of Lake Albert, on the border between Uganda and the Democratic Republic of the Congo.

The 1,445-kilometer pipeline will transport crude oil south from Uganda for export at the Port of Tanga in Tanzania. The EACOP pipeline will carry 216,000 barrels of crude oil per day (10.9 million metric tons per year) at ‘plateau production’ according to the project’s website.

According to calculations based on the specific fuel density of the EACOP blend, the emissions from the burning of this fuel would be at least 34.3 million metric tons of CO2-equivalent (CO2e) per year. These emissions will dwarf the current annual emissions of its two host countries combined, and will in fact be roughly equivalent to the carbon emissions of Denmark.

In addition to significantly contributing to the climate crisis, the project poses serious environmental and social risks to protected wildlife areas, water sources and communities throughout Uganda and Tanzania.

Extraction at the oil fields in Albertine Graben will jeopardize the Murchison Falls National Park, which is important for tourism as Uganda’s second most visited national park. In addition, the mangroves at the coast of Tanzania which the pipeline puts at risk support approximately 150,000 people, in addition to the ecological services they provide. The 300 permanent jobs the pipeline is expected to create will not compensate for the loss of jobs in agriculture, tourism and mangroves. 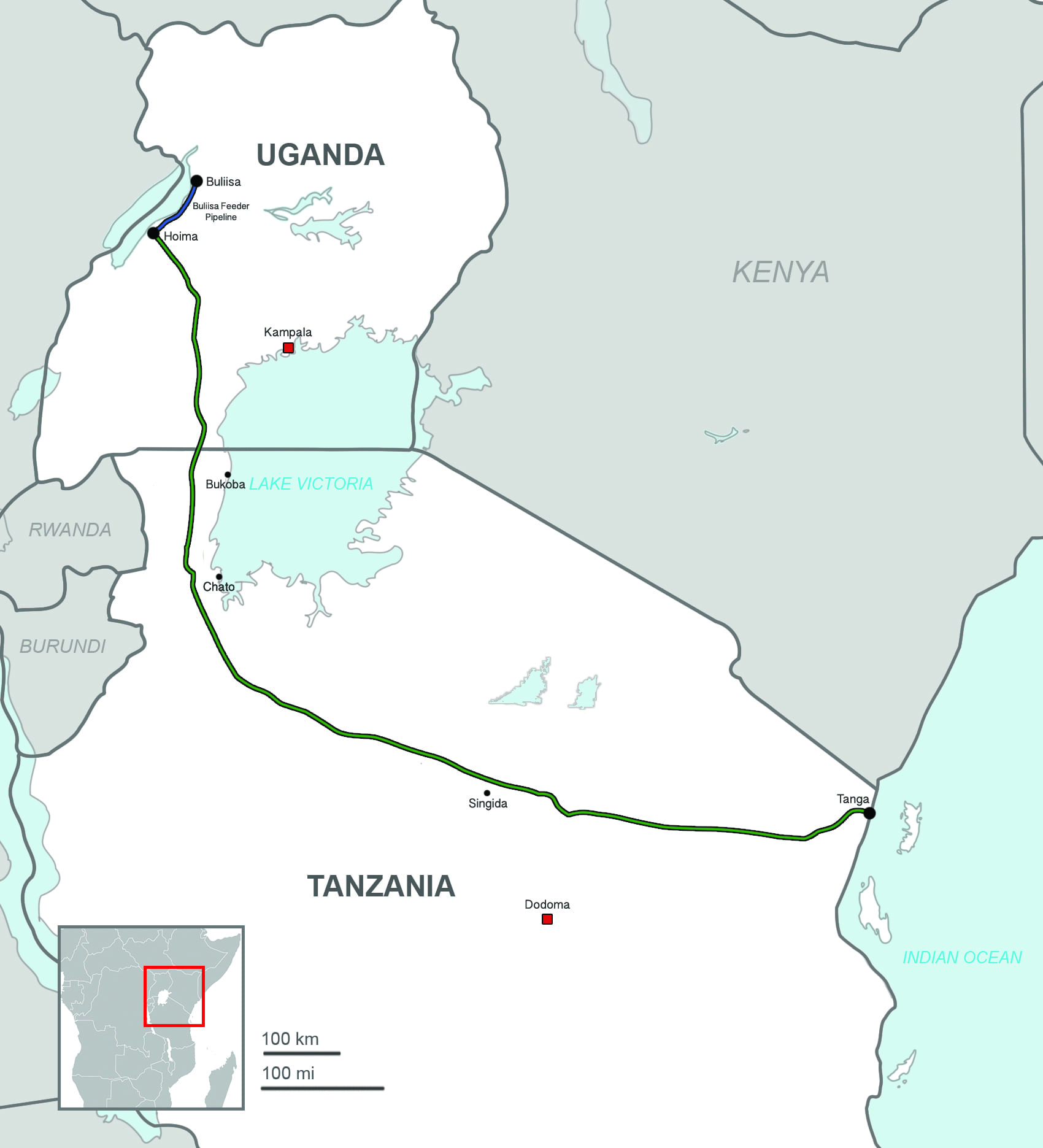 Nearly a third of the planned pipeline (460 kilometers) will be constructed in the basin of Africa’s largest lake, Lake Victoria. More than 30 million people depend on Lake Victoria for water and food production. The pipeline also crosses several rivers and streams that flow into the lake, including the Kagera River.  Possible spills from the pipeline due to bad maintenance, accidents, third-party interference or natural disasters, risk freshwater pollution and degradation in this area – a likelihood that is even greater since the area around Lake Victoria is an active seismic area.

The pipeline route also traverses a number of heavily populated districts in both Uganda and Tanzania, and large-scale land acquisition and resettlement is expected as a result of pipeline construction and associated oil extraction and infrastructure, on both a temporary and permanent basis. Between 9,500 and 14,500 farms are estimated to be affected by construction in Tanzania alone.

As a result of these grave risks, the project is facing significant local community and civil society resistance.

Despite the catastrophic ecological and human rights risks of EACOP, major banks are seeking to raise financing for the project.

Commercial production was originally expected to begin in 2020 but has been pushed back due to delays in finalizing the financing structure.

The exploration company Tullow Oil discovered oil in Uganda’s Albertine Graben in 2006. The government of Uganda issued production licenses for the oil fields in August 2016. Small amounts of oil were extracted during the exploration phase, but full-scale commercial production has not yet begun.

The inter-governmental agreement between Uganda and Tanzania was signed in May 2017, securing the pipeline route.

In April 2020, Total reached an agreement with Tullow to acquire its entire interests in the Uganda Lake Albert Project, including the EACOP pipeline. This agreement leaves Total owning two-thirds of the project, and CNOOC with the remaining one-third.

In September 2020, over 1 million people signed a petition calling on Total to stop drilling in national parks and cancel the pipeline.

International opposition to this controversial and harmful project will only grow. It presents unacceptable risks to local communities, biodiversity and natural habits and it would produce a new source of carbon emissions that the planet can ill afford. As such banks, investors and insurers should steer clear of this project and instead seek opportunities to finance genuine renewable infrastructure to help meet the region’s energy needs in a clean and rights-compatible manner.

Indonesia: The fight to #SaveKendeng

Guinea: Demanding a fair deal for communities from Alcoa-Rio Tinto bauxite mine