The Philippines is one of the world’s most vulnerable nations to the effects of climate change, yet in recent years it has dramatically expanded its coal-fired power industry, which will greatly intensify the threat. That’s why we were surprised when our research uncovered the fact that the World Bank Group’s International Finance Corporation (IFC) has surreptitiously bankrolled the coal boom on the island nation through its investments in third-party financial institutions, despite its 2013 pledge to stop funding coal.

To challenge this broken promise from the IFC, we supported the Philippine Movement for Climate Justice to file a historic complaint about the IFC’s climate busting investments in Rizal Commercial Banking Corporation and demand that the World Bank Group close the indirect lending loophole in its climate and energy policies.

As part of its promise to help tackle climate change, in 2013 the World Bank Group made history when it pledged to stop financing coal, except in “rare circumstances.” After decades of funding coal, the environmental consequences of continuing to do so – calamitous global climate change, rapid deforestation, and air and water pollution – were just too severe.

Former World Bank President Jim Kim articulated the bank’s concerns in May 2017 when he said that building more coal plants, particularly in Asia, where there has been a boom, ”would spell disaster for us and the planet.”

However, despite these strong words, our research found that the World Bank has continued to be a major funder of the coal industry through multilayered financial transactions that exist beyond the scrutiny of the public.

A prime example is the $228 million dollars it provided to the Philippines’ Rizal Commercial Banking Corporation (RCBC), which went on to provide and arrange billions of dollars in financing for new coal power plants and the companies developing them.

Coal-fired power threatens the very existence of the Philippines. As the world’s third-most vulnerable nation to climate change, it has seen increasingly devastating storms and rising sea levels in recent years. As many as 2,410 Filipinos die prematurely annually due to emissions from coal plants, which pollute the air, sea, fisheries and coral reefs, leading to environmental damage and loss of livelihoods.

That’s why Inclusive Development International is supporting the Philippine Movement for Climate Justice in its efforts to halt the rapid expansion of the country’s coal-fired power industry.

We assisted more than 100 citizen groups and 19 affected communities to file a historic complaint against the International Finance Corporation for fueling global warming, environmental contamination and other adverse impacts on communities’ health and livelihoods through its indirect investments in the Philippines coal industry. This was the first climate change-related complaint received by its independent watchdog, the Compliance Advisor Ombudsman (CAO), which conducted a compliance investigation that found that IFC’s investments in RCBC had indeed violated its environmental and social Sustainability Policy.  On April 7, 2022, the IFC board approved an action plan to implement the CAO recommendations.

The CAO recommended that IFC take steps to ensure instances of harm raised by affected communities are assessed and remediated in line with the IFC Performance Standards, and that IFC contribute to remedial solutions as appropriate. CAO also recommended that IFC evaluate and mitigate the climate impacts of the coal plants and institute systemic reforms to ensure it does not contribute to similar harms in the future.

In response to the complaint, the IFC also unveiled a new Approach to Greening Equity in Investments in Financial Institutions (“Green Equity Approach”). The Green Equity Approach requires the financial institutions that it holds equity in to start phasing out coal sector financing immediately and bring their coal exposure to zero by 2030, while simultaneously ramping up their investments in renewable energy. This is a huge and encouraging step in the right direction, but the IFC must expand this policy to cover all fossil fuels that cause global warming.

This complaint is an example of how communities around the world can strategically utilize accountability mechanisms like the Compliance Advisor Ombudsman to advance the movement for climate justice.

In October 2017, we helped the Philippine Movement for Climate Justice and 19 affected communities file a historic climate change complaint against the International Finance Corporation with its Compliance Advisor Ombudsman (CAO).

The complaint accused IFC of supporting 19 new or expanded coal-fired power plants in the Philippines through its investments in Rizal Commercial Banking Corporation. After receiving $228 million in IFC funding and the World Bank’s stamp of approval, Rizal went on to provide or arrange billions of dollars in financing for the power plants and the companies developing them, in violation of the IFC’s social and environmental Performance Standards and climate commitments.

The complaint argued that Rizal bank’s extensive financing of the coal sector should have warranted a cumulative impact assessment of its contribution to climate change.  With its large stake in the Philippine bank and seat on its board of directors, IFC should have been cognizant of the bank’s deep exposure to the coal sector and insisted on a cumulative impact assessment, including the identification and assessment of alternatives. It argued that IFC should have used its considerable leverage to reduce Rizal’s coal exposure and instead increase its support to renewable and low carbon energy generation projects.

The complainants called on IFC to use its leverage to stop the coal projects that have not yet commenced operation, and to ensure that its financial intermediaries in the Philippines and around the world stop financing coal projects and instead fund renewable energy solutions.

The CAO found the complaint eligible (in relation to 11 of the 19 plants it addressed) and, after determining that the complainants and the plants’ developers could not come to an agreement to enter into a dispute resolution process, transferred the case to CAO’s compliance function, which determined that the “substantial concerns” raised warranted a full investigation.

The compliance investigation report found that IFC had failed to ensure that RCBC applied its environmental and social Performance Standards to the financing of the plants. The CAO concluded that this failure very likely caused grave harm to surrounding communities, including serious impacts on livelihoods, health and well-being due to air and water pollution and physical and economic displacement, among other harms. In its report, CAO also notes that, once operational, the plants will produce approximately 40 million tons of CO2 annually – equivalent to roughly 30 percent of the Philippines’ annual emissions in 2019.

This was the first investigation undertaken by CAO to specifically examine IFC’s contribution to climate change and to determine that its failure to stop an equity client from financing new coal-fired power plants violated its environmental and social policies and climate commitments.

The CAO recommended that IFC take steps to ensure instances of harm raised by affected communities are assessed and remediated, consistent with the requirements of the IFC Performance Standards, and that IFC contribute to remedial solutions as appropriate. CAO also recommended that IFC evaluate and mitigate the climate impacts of the coal plants and institute systemic reforms to ensure it does not contribute to similar harms in the future.

In April 2022, IFC’s board of directors adopted a Management Action Plan that goes part way toward addressing the CAO’s recommendations. In response to a request by the Complainants, who were concerned that the plan overly relied on the cooperation of the coal companies to provide redress, IFC agreed to return to the board within 9 months to provide a progress update and make adjustments to the plan if needed. 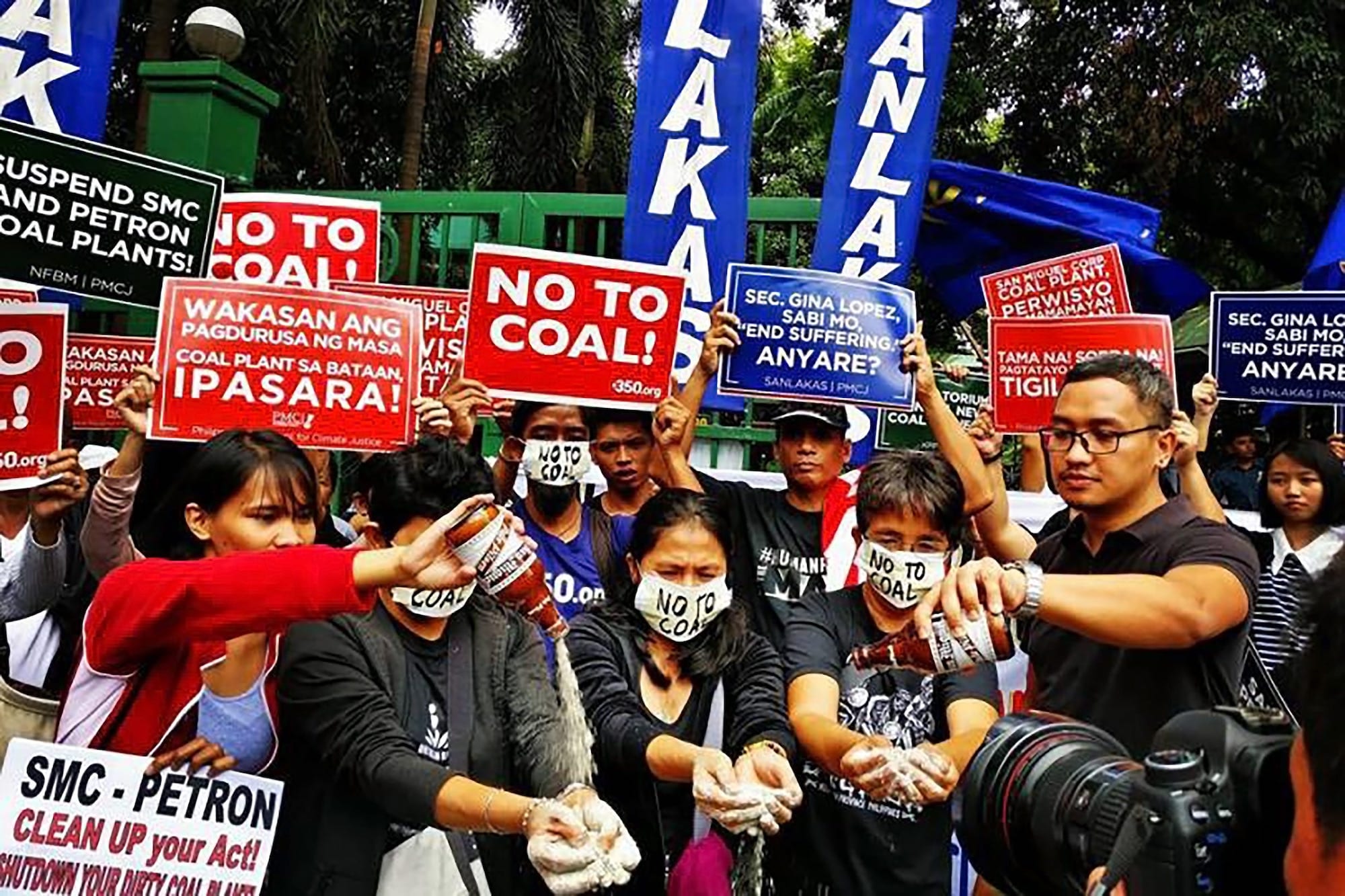 According to scientists, limiting the increase in the global average temperature to 1.5 degrees Celsius above pre-industrial levels is the lowest limit still physically possible to achieve. Holding the increase to such a limit would significantly reduce the risks and impacts of climate change. But the window of time is rapidly closing. In a few years, unless drastic changes in energy consumption and development are undertaken, 1.5 degrees will no longer be possible and the world will face catastrophic climate change.

The Philippines is the one of the world’s most vulnerable countries to climate change, according to the Global Climate Risk Index. The island nation is located in an area of the Pacific Ocean that has especially warm water, which is further heating up as global temperatures rise. This warming has increased the intensity of typhoons, according to scientists. Four of the worst storms in Philippines history have occurred in the last decade, including Typhoon Haiyan, which killed at least 6,300 people in 2013. Sea levels in the country are expected to rise three times faster than in the rest of the world. The impact of these storms reverberates long after the initial deaths and property damage are tallied. In 2016 alone, natural disasters displaced an estimated 6 million Filipinos. As storms become fiercer, the number of people vulnerable to physical and economic displacement will increase commensurately and the country’s poor will be disproportionately affected, in many cases falling deeper into poverty.

Central to addressing the threats and impacts brought about by the climate crisis is energy system transformation.  Carbon-polluting fuels like coal must be phased out and replaced with clean and safe renewable energy. However, the Philippine Government continues to pursue a massive expansion of coal power to address the nation’s energy needs, an incongruous policy for a country that is among the most vulnerable to climate change impacts.

Activists who speak out against harmful development projects face grave danger. In 2016, 28 environmental and land defenders were murdered in the Philippines, making the country one of the most dangerous in the world for such work. Anti-coal campaigner Gloria Capitan was murdered in July 2016 for opposing the expansion of coal, including several projects that received indirect IFC backing.

In October 2016, Inclusive Development International exposed the IFC’s hidden support for these new coal projects in the Philippines in “Disaster for Us and the Planet” – Part 1 of our four-part investigative report, Outsourcing Development: Lifting the Veil on World Bank Group’s Lending Through Financial Intermediaries.The report exposes how the World Bank Group is undermining its international climate commitments by quietly funding a coal boom in Asia through multilayered financial transactions that are mostly concealed from public examination.

The investigation revealed 41 new coal projects supported by the IFC through its highly opaque investments in commercial banks, private equity funds and other financial intermediaries since 2013, when the bank committed to stop funding coal. Nineteen of those projects are in the Philippines. The investigation laid the basis for the Philippine Movement for Climate Justice complaint.

In response to the Philippines complaint and the intensifying public scrutiny of the World Bank Group’s indirect investments in fossil fuels, the IFC adopted a new Green Equity Approach. The new approach to financial intermediary lending aims to support the banking sector to mobilize the $23 trillion in debt financing that the IFC estimates is necessary to finance the transition to clean energy, while requiring the 20% of financial institutions in which it holds equity, such as Rizal bank in the Philippines, to phase out all of their exposure to coal-related activities by 2030.  It requires its equity clients to report annually to the IFC on its aggregate coal exposure, which will be publicly disclosed by the IFC.

Indonesia: The fight to #SaveKendeng

Guinea: Demanding a fair deal for communities from Alcoa-Rio Tinto bauxite mine