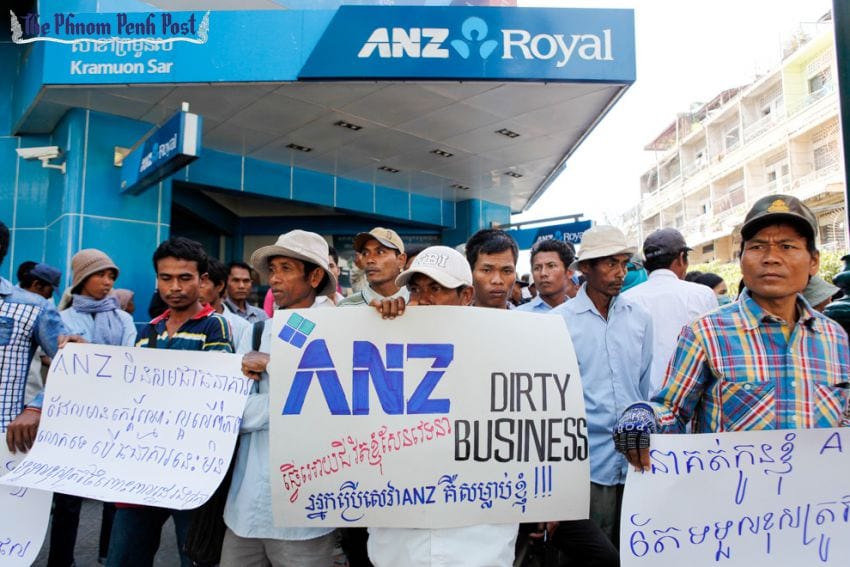 (Phnom Penh) – Cambodian families who were forcibly displaced by Phnom Penh Sugar Company have received a promised payment from Australia’s ANZ bank, which financed the sugar company from 2011-2014.  Distribution of the funds, which ANZ agreed to pay in 2020, was complete as of this week, according to Inclusive Development International and Equitable Cambodia, two NGOs that supported the families in their negotiations with the bank and that were tasked with disbursing the funds. Along with ANZ’s launch today of a new grievance mechanism to address human rights-related complaints, this brings closure to a landmark human rights case.

“With this money, the more than one thousand families forcibly evicted from their land by Phnom Penh Sugar are rebuilding,” said Eang Vuthy, Executive Director of Equitable Cambodia. “It doesn’t undo the years of suffering they’ve endured, but it is a significant help to families in getting back on their feet after many years, and we are thankful that ANZ fulfilled its promise. In the meantime, we urge the government to expedite the land resolution process to end this longstanding land dispute.”

“I was very happy that ANZ agreed to return the profit from its loan to Phnom Penh Sugar to the communities who were affected,” said Seng Chathy, a 43 year-old woman living in Trapaing Angkrong village, Oral district.  “It shows ANZ’s willingness to take responsibility for the truth of what happened. Affected families are very appreciative, not only my family but also all other families in my community. The money will help to restore affected family livelihoods.”

The payout comes following nearly a decade of advocacy by communities who were forced from their homes in 2010 and 2011 to make way for a sugar plantation and refinery in Kampong Speu province. In October 2014, Inclusive Development International and Equitable Cambodia filed a complaint against ANZ, on behalf of the affected families, to the Australian National Contact Point for Responsible Business Conduct, an Australian government body that promotes the OECD Guidelines for Multinational Enterprises and works to resolve claims of corporate misconduct. The complaint detailed widespread violations of human rights on the part of ANZ’s former customer Phnom Penh Sugar and argued that ANZ had contributed to and profited from those activities through its loan to the company, and as a result had a responsibility to contribute to redress.

“While it took several years for the bank to come to the table, ANZ ultimately decided to work with us to help the affected families. And in the end, doing the right thing paid off –for the families and for the bank, which was able to remove a stain on its reputation through this action,” said David Pred, Executive Director of Inclusive Development International. “Responsible business conduct means if you make a mistake, you do what is necessary to fix it – and ANZ deserves credit for doing just that in this case.”

In February 2020, the Australian National Contact Point facilitated a conciliation meeting between the parties. ANZ acknowledged that its due diligence on the project funded by its loan was inadequate and agreed to provide the displaced families with a financial package equivalent to the profit the bank had earned from its loan. Equitable Cambodia and Inclusive Development International then worked with community representatives to devise and carry out an inclusive process to distribute the settlement funds to affected families, identifying and certifying 1,096 families eligible for the funds and taking steps to ensure that they received an equitable share.  A portion of the settlement was set aside to fund local development projects, designed by the communities themselves.  The distribution process was delayed as a result of the COVID-19 pandemic but came to a close this week.

“Even though the money is not a lot, it will still help my family, especially given that I am the head of the household,” said Pin Sokhim, a 42-year old woman living in Svay Teab village, Oral district.  “What encourages me particularly is that ANZ has shown a high level of responsibility by acknowledging the mistakes that it made in giving a loan to Phnom Penh Sugar Company. I hope that ANZ will never again give loans to companies which undertake operations that make people cry.”

Implications for the Commercial Banking Sector

ANZ set twin human rights precedents for the banking sector through its financial contribution to the families who were harmed by Phnom Penh Sugar and its launch of a new human rights grievance mechanism, which advocates applauded despite some flaws.  ANZ’s actions place pressure on its peer banks worldwide to strengthen their human rights due diligence, and they solidify the norm that when financial institutions contribute to harm, they have a responsibility to contribute to remedy.

“Now that ANZ has shown that banks can contribute to remedy and make a tangible, positive difference in the lives of affected people without the sky falling in for their business, we expect to see other banks follow suit,” said Natalie Bugalski, Legal Director of Inclusive Development International.

“This case should also be a lesson for other National Contact Points in the OECD system,” she added.  This is only the third known time in the 20-year history of the system – and out of more than 330 cases filed by communities and NGOs – that a complaint process has resulted in a concrete financial remedy for complainants.

“The outcome of the ANZ case, which the Australian NCP made possible through its responsiveness to the opportunities that arose to secure a remedy, demonstrates that NCPs really can deliver a measure of justice for communities if they use their tools strategically.  Other NCPs around the world should take note.”

The Australian National Contact Point Follow Up Statement and Statement of the Parties (February 2020) can be found here.

More information about the case can be found here.