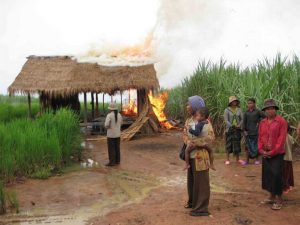 (April 2, 2018) - Displaced farmers from Cambodia have filed a landmark class-action lawsuit against the Thai sugar giant Mitr Phol. The legal complaint was filed in a Thai civil court by two plaintiffs representing a class of approximately 3000 people who were violently displaced and dispossessed of their land and livelihoods in five remote villages in northwestern Cambodia to clear the way for a Mitr Pohl sugarcane plantation between 2008 and 2009. Mitr Phol, the world’s fourth-largest sugar producer, supplies global brands including Coca-Cola, Pepsi, Nestle and Mars.

This is the first ever class-action lawsuit filed in the Thai courts by plaintiffs from another country for abuses committed by a Thai company outside of Thailand. The suit alleges that Mitr Phol’s operation in Cambodia’s Oddar Meanchey province resulted in violent forced evictions, burning of homes, looting of crops and livestock and the seizure of land that was legally held by local farmers. Forests inside the company’s land concessions that local communities relied upon for their livelihoods were illegally logged. Those who resisted were threatened, arrested and imprisoned.

“We filed this lawsuit because Mitr Phol took our land, our harvest, our access to the forest, and our children’s opportunities to go to school,” said one of the affected community members, who requested anonymity due to threats to her safety.

Landless and unable to make a living, many of the families have become deeply impoverished.

“Since Mitr Pohl took my land, my family and I have suffered tremendously. My house was burned down. I was arrested without reason, and as a result my family had nothing to eat and had to collect trash to survive. To this day, I have no land or house,” said Ma Okchoeurn, another affected person.

Following a two-year investigation of the case, the National Human Rights Commission of Thailand found Mitr Phol directly responsible for human rights violations committed in conjunction with its operations in Cambodia. The land grab led to the “collapse of the community,” former commission chairman Niran Phitakwatchara said at a press conference in 2015. The commission’s final report held that the company “must compensate and redress the damages caused to affected people.”

Mitr Phol told the commission that it would compensate affected people in accordance with international standards but has failed to do so.

The legal complaint agues that a ruling in favor of the plaintiffs would be in the public interest, because it would make Thai companies more likely to refrain from violating human rights in foreign countries -- a current risk to the country’s image. Such a ruling would also encourage the Thai government to take its extraterritorial human rights obligations seriously and sanction Thai companies that commit abuses overseas.

The displaced families have spent years pursuing justice, including repeated unsuccessful attempts to engage with Mitr Phol, which closed its operations in Cambodia in 2015.

In 2011, the displaced families lodged a complaint against Mitr Phol with Bonsucro, the sugar industry sustainability initiative. Instead of holding member company Mitr Phol accountable for violations of its code of conduct, Bonsucro instead presented the sugar producer with its annual sustainability award in 2015. Bonsucro has yet to address a complaint that was resubmitted to the group against Mitr Phol in 2016.

Coca-Cola, which has counted Mitr Phol as one of its largest global cane suppliers, investigated an NGO complaint about the case after the company announced a policy of “zero tolerance” for land grabbing in its supply chain in 2013. However, despite years of purported “engagement” by Coke and inaction by Mitr Phol, the U.S. beverage giant has failed to end its supply relationship with Mitr Phol.

“It’s time for the big sugar buyers to put their human rights rhetoric into practice and cut off suppliers that commit such gross violations,” said David Pred, Executive Director of Inclusive Development International, which supported the communities in filing the class action. “Coca-Cola garnered enormous public relations points for its land rights pledge, but when put to the test, the company has shown remarkable tolerance for a top supplier that torched people’s homes and left hundreds of families destitute.”

The Legal Rights and Environmental Protection Lawyers Advocacy Association and the Community Resource Centre Foundation are representing the plaintiffs in the class action lawsuit.