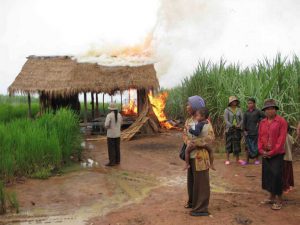 (March 11, 2019 - Bangkok) – Representatives of more than 700 Cambodian families who were violently displaced to make way for a sugar plantation have filed a formal complaint against Bonsucro, the sugar industry’s sustainability certification body, for breaches of the OECD Guidelines for Multinational Enterprises. The complainants allege that Bonsucro failed to hold a member company, Mitr Phol, accountable after the Thai sugar giant grabbed their land and left them homeless and destitute.

Representatives of the families filed the complaint with the UK National Contact Point, a government body that handles human rights grievances against British multinational enterprises. Bonsucro is headquartered in the United Kingdom, a member of the OECD, and has operations that span the globe.

The families were forced off their land to make way for Mitr Phol’s sugarcane plantations between 2008 and 2009. Those who sought to defend their rights were thrown in jail. The families have endured more than a decade of impoverishment and related hardships as a result of the land seizures.

“We thought Bonsucro would help us find justice, but instead they just protected their member’s reputation, said Hoy Mai, one of the displaced farmers who spent eight months in prison while pregnant for peacefully protesting the land grab.

This week, Bonsucro’s 450 members will gather in Bangkok for the association’s annual meeting. Bonsucro Global Week will showcase the sustainability efforts of Mitr Phol, which is described in the program notes as a “leading member.” The week’s events will culminate with a visit to a Mitr Phol sugar mill. Mitr Phol’s current and former corporate customers, including The Coca-Cola Company, PepsiCo, Mars Wrigley, Nestlé and Corbion will attend the event.

“The international framework on business and human rights calls upon industry associations like Bonsucro to provide effective grievance mechanisms for people harmed by their members. Bonsucro has spectacularly failed to fulfill this responsibility,” said Natalie Bugalski, Legal Director of Inclusive Development International. “On behalf of the displaced communities who turned to Bonsucro to support their quest for justice, and the consumers who were led to believe that the Bonsucro label meant ethically produced sugar, we are seeking accountability.”

Industry sustainability bodies such as Bonsucro have become increasingly important in recent years, as the public demands ethical sourcing of commodities found in consumer products. Bonsucro claims its mission is “to ensure that responsible sugarcane production creates lasting value for the people, communities, businesses, economies and eco-systems in all cane-growing regions.”

The complaint alleges the opposite: Rather than hold Mitr Phol to these standards, Bonsucro whitewashed the company’s human rights abuses with its stamp of approval, helping to facilitate access to the global sustainable sugar market.

Despite an investigation by the Thai National Human Rights Commission, which found Mitr Phol responsible for the land grab and called upon the company to "correct and remedy the impacts," Mitr Phol has steadfastly refused to provide any form of compensation to the Cambodian families whose lives it destroyed.

Representatives of the evicted families submitted a complaint against Mitr Phol to Bonsucro’s grievance mechanism in 2011. A year later, the Thai company withdrew from Bonsucro rather than address the complaint. In 2015, Bonsucro quietly reinstated Mitr Pohl and never restarted the complaint process. Inclusive Development International, Equitable Cambodia and LICADHO filed another complaint in 2016, which Bonsucro’s board dismissed in December 2018 on the grounds that it had not received “cogent evidence that…Mitr Phol breached the terms of Bonsucro’s Code of Conduct in place at the time.”