A group of displaced people in northeastern Guinea has filed a formal complaint with the World Bank’s private-sector arm, the International Finance Corporation (IFC), for its role in supporting a mining company that grabbed their land and left them destitute. 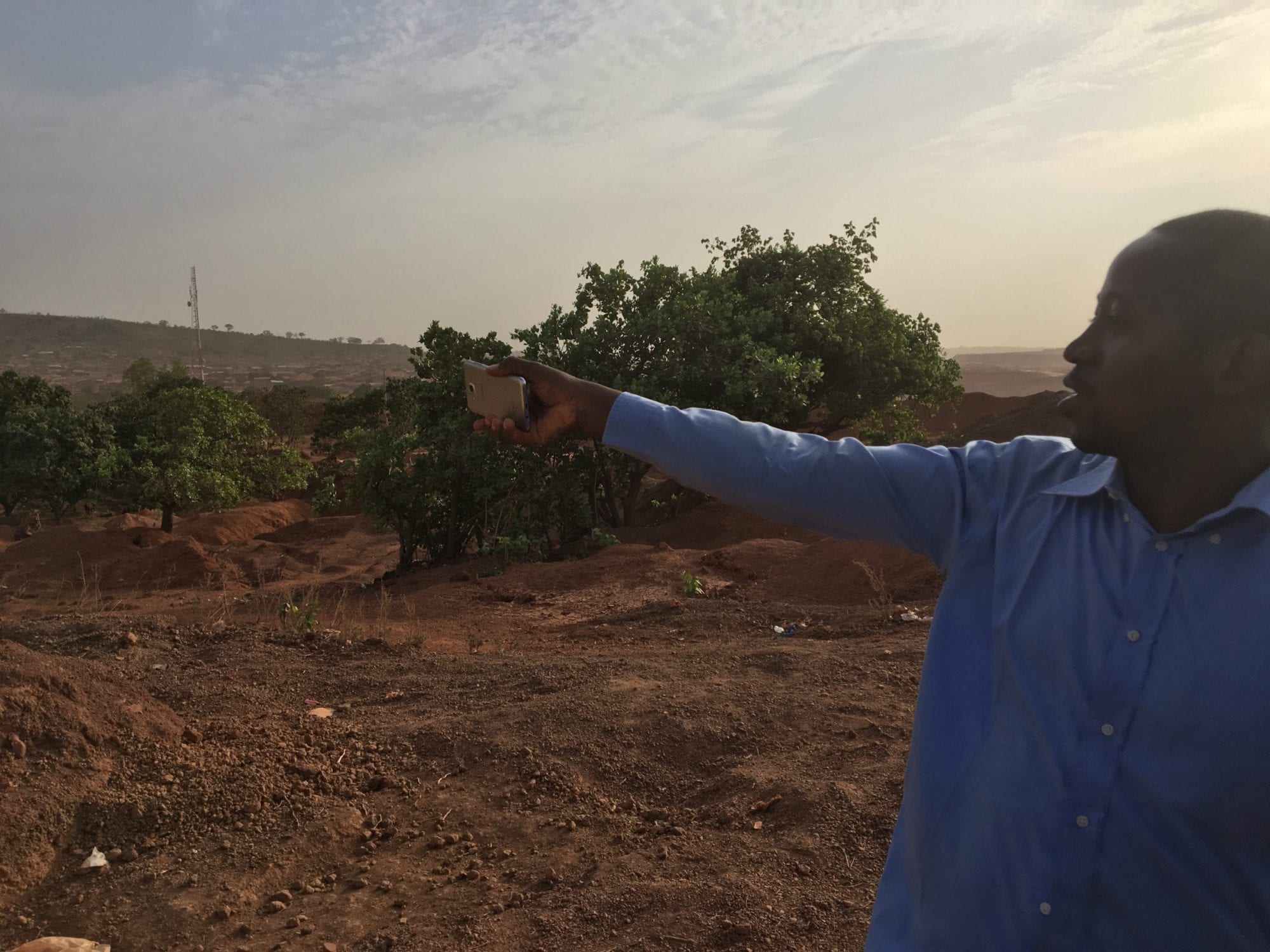 A group of displaced people in northeastern Guinea has filed a formal complaint with the World Bank’s private-sector arm, the International Finance Corporation (IFC), for its role in supporting a mining company that grabbed their land and left them destitute.

The complainants are artisanal gold miners, merchants and smallholder farmers, whose ancestors have lived in the Siguiri region of Guinea for more than 800 years. In late 2015 and 2016, approximately 380 households were forcibly evicted from their ancestral land in Kintinian commune to make way for an open-pit oxide goldmine controlled by mining giant AngloGold Ashanti and backed by Nedbank of South Africa, an intermediary lender for the IFC.

The complaint describes how the evictions were carried out in the context of violence, destruction of property, intimidation and arbitrary arrests carried out by state security forces. The complainants believe they were provided with inadequate compensation for their losses and no measures have been taken to restore their livelihoods — all flagrant violations of the IFC’s environmental and social policies.

“The company took everything from us,” said Balla Camara, a representative of the affected community.” “We’ve been left with nothing: no trees, no water, no work because they did not even recruit us.”

“We’ve seen no benefit from this mine. Where we are, there is only suffering, no happiness,” said Lala Conde, another community representative. “We can’t understand why the World Bank would support something like this,” she added.

Despite its extraordinary mineral wealth, Guinea remains amongst the ten poorest countries in the world. “Foreign mining companies have extracted billions of dollars worth of minerals from Guinea’s rich subsoil, but the population has seen little improvement in living standards,” said Aboubacar Diallo, Community Rights Program Coordinator for Le Centre du Commerce International pour le Développement (CECIDE). “On the contrary, local communities like Kintinian have been left worse off from the harmful environmental, social, economic and cultural impacts of mining operations.”

The complaint was filed with the IFC’s independent grievance redress mechanism, the Compliance Advisor/Ombudsman (CAO). The families are being represented by two Guinean organizations, CECIDE and Les Mêmes Droits Pour Tous (MDT), and Inclusive Development International.

The complaint argues that the IFC’s due diligence failures, with respect to its investment in Nedbank, contributed to the harms suffered by the complainants.

In 2007, the IFC joined with the African Development Bank to provide Nedbank with a $280 million loan designed to increase lending for “resource-extraction projects,” among other goals, according to an IFC press release. In 2015, while still a client of the IFC, Nedbank provided a $105 million loan to AngloGold Ashanti in conjunction with another South African bank. The loan was for general purposes, meaning AngloGold Ashanti could use the money as it saw fit, including funding its mining operations in Guinea and around the world.

“This case fits into a pattern that we have documented whereby the World Bank and other development institutions are increasingly outsourcing their work to commercial banks and other financial intermediaries,” said David Pred, Managing Director of Inclusive Development International.

“When the IFC makes these investments, it is supposed to require the intermediary to ensure that the projects and companies it finances adhere to the IFC’s environmental and social standards. But in practice, once the IFC’s funds are disbursed, the banks are left to go on with business as usual, paying little heed to the impacts of their deals on people and the environment,” he added.

AngloGold Ashanti is the world’s third-largest gold mining company, with operations on three continents and revenue of $4.25 billion in 2016. Its largest shareholder is the U.S. asset manager BlackRock, whose CEO, Larry Fink, has publicly declared his firm’s intent to integrate environmental and social considerations into its investments.

AngloGold Ashanti’s other shareholders include GEPF, South Africa’s government pension fund, along with 11 North American, European and Asian pension funds, including PGGM, TIAA and APG. These pension funds claim to invest responsibly and have guidelines protecting people and the environment. Norway’s sovereign wealth fund, the Norwegian Government Pension Fund Global, also holds a significant stake in AngloGold Ashanti, despite its Ethics Council recommending in 2013 that the fund divest from the company due to serious environmental damage that it caused in Ghana.

“Many of these banks say they respect human rights and adhere to international standards, yet none of them have a clear process for remediating human rights impacts to which they have contributed,” said Natalie Bugalski, Legal Director of Inclusive Development International. “As such we expect them to get behind the CAO process and ensure that it delivers justice for the people harmed by their client in Guinea.”

The complainants are seeking full and fair redress for all of the harms and losses they have suffered, in accordance with their rights and entitlements under the IFC Performance Standards and Guinean and international law. They also want to see development benefits from the project as envisioned by the Performance Standards. They have asked the CAO to facilitate mediations with the IFC, Nedbank and AngloGold Ashanti to address their grievances.

Background on the evictions

AngloGold Ashanti has an 85% stake in a joint venture company that holds a 1,500-square-kilometer mining concession in Siguiri Prefecture. In 2013, the company announced that it needed to expand its mining operation into a cluster of villagers that it called “Area One.” The affected families, however, did not agree to the resettlement terms that the company offered. In early 2015, AngloGold Ashanti issued a memorandum in which it asked the Guinean government to make Area One available by August of that year or it would be obliged to cease all its operations in Siguiri, Guinea.

When the negotiations with the community broke down, their negotiators were arbitrarily arrested and detained. State security forces, including the bérets rouges, a military unit notorious in Guinea for its implication in serious human rights abuses, moved into the area and began abusing the population. According to the residents, members of the security forces looted their businesses, taking their merchandise. They used tear gas in private homes, beating their occupants, and setting huts on fire. People were arrested and shot. Hundreds of people fled the area and slept in the bush.

An international fact-finding mission that investigated these events described it as a “hostage” situation. The mission report concludes that, while “security forces allege that the main reason for their presence was their intervention against illegal semi-industrial mining, a second motive was to force the residents of Area One to accept the inventory of their lands and other possessions, which they had refused to do for a long time.” According to the complainants and other eyewitnesses, soldiers with guns entered people’s homes accompanied by representatives of the mining company (so-called resident agents) and forced them to sign the inventories.

The families were moved to a resettlement site that lacks water, electricity and means to make a living. Dust from the nearby mine pollutes the air, causing respiratory problems for the local population.

The complaint is available in

– Involuntary Resettlement for the Extension of a Gold Mine in Kintinian: Kintinian, Guinea – Fact-Finding Mission Report (January 2017), at: https://communitiesfirst.net/2017/01/31/kintinian-report/

– Unjust Enrichment: How the IFC Profits from Land Grabbing in Africa (April 2017) at: https://www.inclusivedevelopment.net/wp-content/uploads/2017/04/Outsourcing-Development-Africa.pdf