In 2012, the Myanmar government and the Karen National Union signed a historic ceasefire agreement. After nearly 70 years of brutal conflict, relative peace and stability had finally come to southern Myanmar. In the Tanintharyi region, a lush, mostly untouched mountainous area on the border with Thailand, where the fighting had been fierce, the residents began to feel hope.

That hope quickly began to fade. Around the time of the ceasefire, a consortium of Myanmar and Thai companies descended on Ban Chaung, a remote part of Tanintharyi, to do what years of civil war had made impossible: extract the region’s rich natural resources. The companies, led by the Myanmar firm Mayflower Mining, had discovered coal in the area, and they secured a license to establish a 2,100-acre mine and related infrastructure.

The mine, even in its early stages, made hundreds of people from Ban Chaung poorer. In addition, the project polluted rivers and streams and caused fires that burn almost constantly, emitting noxious fumes. All of this made people in the area ill. Local civil society groups estimated that the mine could harm 16,000 people from 22 villages when it became fully operational. It also threatened to destroy a large area of pristine forest. Additionally, the impacts of the project would be felt far beyond Myanmar, with low quality coal from the mine destined to feed power plants that generate harmful greenhouse gas emissions.

IMPACTS OF THE BAN CHAUNG COAL MINE

The project threatened the traditional way of life, livelihoods and right to self-determination of the impacted Karen communities. At no point did the companies ask their permission to mine their ancestral land. Rather, they obscured their true intentions at nearly every stage, according to community members. As one 29-year old farmer explained, “They came in and surveyed my land and killed my betel nut orchard. They didn’t ask for my permission. Nobody told me what was going on.” 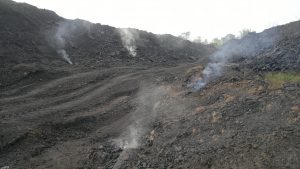 The mine dumped toxic waste directly into streams used for fishing and drinking water, causing fish to die and people to fall sick with skin diseases and other illnesses. In 2014, NGOs tested water in the area around the mine and found that it was very acidic. This water flows into local streams and rivers in the rainy season. At its full permitted area of 2,100 acres, the project risked contaminating the main water source for 6,750 people.

After the rains, mining pits were left full of filthy water. The company pumped the water out of the pits and onto farmland and into streams. The polluted water and sediment from the mine seeped onto orchard areas and betel nut trees, killing crops. These crops are the major source of local people’s livelihoods.

Villager’s land was seized by the developers. While a handful of households subsequently received some compensation, others did not receive any compensation at all. The area where the mine is located is a former conflict area, and some refugees and internally displaced people have still not returned to their former properties. Development of the mine threatened their ability to ever return.

The number of outsiders that came into the area – both workers and KNU soldiers providing protection to the mine – increased. After suffering through many years of conflict people again began to feel unsafe in their own homes.

In 2015, the situation deteriorated dramatically when coal fires began burning uncontrollably. The fires, which occur when underground coal deposits smolder, are an unavoidable byproduct of strip mining. They release toxic fumes that create serious health problems for people and the environment. The smell can be unbearable. Every now and then the company would respond to complaints from the people or local authorities and throw additional earth on the burning ground, but the fires would begin again soon after.

In 2017-18, health experts from Thailand came to the area and found numerous serious health issues among local villagers, including respiratory problems caused by the constantly burning coal waste. In 2018, local civil society groups and community volunteers conducted a health survey with over 80 households, and is now working working with Thai health professionals to assess the full extent of the project’s impacts on local people.

THE THAI COMPANIES BEHIND THE PROJECT

Permission to mine in the Ban Chaung area was first granted to the Myanmar company Mayflower Mining, owned by a Myanmar citizen who is reportedly politically connected and one of the country’s wealthiest people. Mayflower played the role of broker in this project, and was not involved in the day-to-day operation of the project. The work was done by Mayflower’s Thai partners, who received permits to work in the area through the KNU. At least three Thai companies were involved in the project, East Star Company, Thai Asset Mining Company and Energy Earth PCL.

Villagers affected by the mine, and those concerned that they would be affected by future expansion, struggled for years to find a solution to the problems that the mine has brought. Company responses to their complaints were superficial and did not address the impacts that communities were facing. The regional government called for mining to be suspended on several occasions, but the project continued to operate until March 2017, when the company was finally forced to cease operations and deal with community grievances.

The complaint alleged several serious human rights violations suffered by local communities in Ban Chaung, including the right to self-determination, the right to an adequate standard of living and the right to health. The complaint also alleged that the project proceeded without the consent of the affected communities and agricultural land and orchards were illegally seized. It went into detail on how solid waste from the Ban Chaung mine burns and emits foul smoke, driving people away from their homes and making them dizzy and sick. Complainants described how the project polluted local water sources that residents use for drinking, bathing and cooking, and how pollution flowed into local streams and rivers, killing fish and crops, harming people’s livelihoods.

SUBSEQUENT DEVELOPMENTS AND CANCELLATION OF THE MINING LICENSE BY THE KNU

Following the hearing, Ban Chang communities continued to advocate with regional and national government for the mining license to be cancelled and for action to be taken to stop the coal waste from burning. Rather than sit back and wait for the human rights commission to issue its report, communities and their civil society supporters used various creative strategies to keep the case in the public eye.

Soon after the commission hearing, in December 2017, Takapaw Youth Group travelled to Geneva and presented the case at the United Nations Forum on Business and Human Rights. This led to continued publicity, and caught the attention of the United Nations Working Group on Business and Human Rights, which subsequently made a series of recommendations to Thai stakeholders involved in outbound investment to address and avoid human rights violations in outbound investments.

Meanwhile, community members remained active. This included posting community updates on the Stop Coal Mining in Ban ChaungFacebook page, which was set up in late 2016. Posts tell the community story, raising awareness about the impacts of the mine, but also share pictures and stories about the local communities’ way of life. In May 2018, the Ban Chaung Community Sustainable Conservation Committee co-published a report with Takapaw Youth Group called “The Wisdom, Knowledge and Customs of Indigenous Communities in Ban Chaung.”The report provided a unique view into the culture of the Karen communities and the ecosystems that were threatened by the Ban Chaung coal mine.

After the suspension of operations in March 2017, the developers were eager to at least appear to be seen as addressing community concerns, and East Star proactively went house to house trying to persuade people to accept the project and sign a document expressing support. Some people signed, despite not being able to read the document, in response, over 500 villagers sent a petition to the national government to set the record straight and calling for the project to be permanently cancelled.

With company in the midst of a financial crisis it withdrew from the Myanmar project, leaving East Star without a financial backer. This coincided with the Karen National Union-ordered suspension of operations in March 2017, and left the project in limbo. With the affected communities maintaining solid resistance to the project, and the company failing to get adequate community buy-in, and no doubt struggling to find funds to move forward, the KNU announced that the mining license was suspended on 24 March 2018.

WHAT NEXT FOR THE BAN CHAUNG COMMUNITIES?

The cancellation of East Star’s mining license represents an important victory for the community and is the result of committed and united community actions, unflinching support from local civil society groups, which was bolstered by Inclusive Development International providing information on the investors behind the project, and identifying transnational advocacy opportunities. With the combined community and NGO actions coinciding with the Energy Earth’s financial and legal issues, the project first faltered, then collapsed. However, the struggle is not over. The Myanmar company, Mayflower, still holds a license to mine in the area granted by the central Mining Department. Communities are monitoring the project site for any sign that a new investor may step in, and continue to lobby national government to cancel Mayflower’s license, take steps to remedy the harms caused by the project and stop the coal fires burning once and for all.

No Response, No Accountability for Tenasserim Coal Mine Damage, The Irawaddy (October 30, 2015)

The Wisdom, Knowledge and Customs of Indigenous Communities in Ban Chaung, (May 2018)

We Used to Fear Bullets, Now We Fear Bulldozers (October 2015)