Representatives of indigenous Karen communities in Myanmar this week filed a complaint with the National Human Rights Commission of Thailand alleging human rights violations resulting from the activities of Thai companies operating an open-pit coal mine. 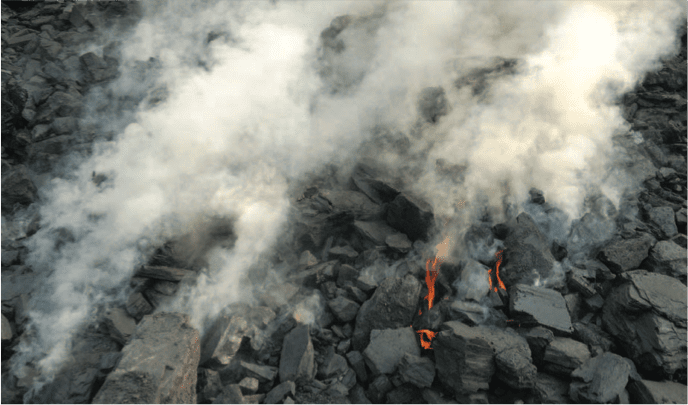 Representatives of indigenous Karen communities in Myanmar this week filed a complaint with the National Human Rights Commission of Thailand alleging human rights violations resulting from the activities of Thai companies operating an open-pit coal mine. The Ban Chaung mine has polluted the air and water, harmed the livelihoods of local people, and led to the illegal seizure of agricultural land, among other harmful impacts, according to the complaint.

The mine is expected to harm as many as 16,000 people living in 22 villages in the Ban Chaung area of Tanintharyi Region, which experienced decades of conflict between Karen National Union forces and the Myanmar military. The project has led to an influx of workers and armed soldiers from outside the area, making local people feel unsafe again following the signing of a provisional ceasefire agreement in 2012.

The complaint, filed with the support of local NGO Tarkapaw Youth Group and Inclusive Development International, asks the human rights commission to investigate the activities of the three Thai companies that have been connected to the mine: Energy Earth PCL, East Star Company and Thai Asset Mining Company. A fourth company, the Myanmar-based Mayflower Mining Enterprise Co., Ltd., holds the 2,100-acre mining concessions.

According to Tarkapaw Youth Group: “The government granted a mining permit for this project in a remote area that is very difficult to monitor. The Thai companies are working for their own benefit, while ignoring the impacts of the project. It is time for the government to review the Ban Chaung coal mine and take action. We also call on the National Human Rights Commission of Thailand to review the conduct of the Thai companies and take the necessary action to remedy any harms caused by this project.”

The independent National Human Rights Commission of Thailand is one of the few national human rights bodies in the world that investigates the overseas activities of private companies registered in its territory. At the conclusion of its investigations, the commission issues public reports detailing its findings.

The complaint alleges several serious human rights violations suffered by local communities in Ban Chaung, including the right to an adequate standard of living and the right to health. Solid waste from the Ban Chaung mine burns and emits foul smoke, driving people away from their homes and making them dizzy and sick. The project has polluted local water sources that residents use for drinking, bathing and cooking. During the rainy season, this pollution flows into local streams and rivers, killing fish and crops, which harms people’s livelihoods, according to the complaint.

The developers of the mine illegally seized agricultural land from local people, some of whom received no compensation, the complaint alleges. The complaint describes how the companies failed to seek the consent of the local Karen communities, violating their right of self-determination and threatening their traditional way of life.

“Coal mines are known to be among the highest-risk projects in terms of human rights, environmental and social impacts, and this one was developed in the middle of a region just beginning to recover from a brutal decades-long conflict,” said Natalie Bugalski, Legal Director of Inclusive Development International. “Yet the companies have completely failed in their duty to consult with local communities and carry out human rights due diligence.”

Mayflower Mining, reportedly owned by one of Myanmar’s wealthiest people, received the concessions in 2010 and 2011 but is not involved in operations on the ground. Ratchaburi-based East Star and Kanchanaburi-based Thai Asset are developing the mine and related transportation infrastructure. The Bangkok-based corporation Energy Earth signed an agreement in 2012 to fund the mine and distribute the coal to its network of buyers.

Representatives of the affected communities say they have tried in vain for years to negotiate with the companies developing the mine. They are now calling for the project to be stopped.

One community representative from an affected village summed up the complaint: “We are seriously impacted from the burning of the coal and we can see that the company is unable to manage this issue, which is making our lives unbearable. We are really afraid that the coal burning will last forever. We hope that the National Human Rights Commission of Thailand will investigate this project and ensure that Thai companies are not violating the rights of communities in Myanmar.”

This press release is available for download in Burmese here and in Thai here.