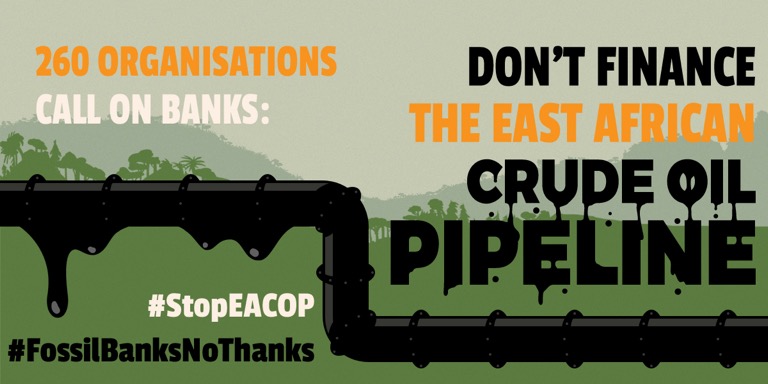 Today, 263 community and non-governmental organizations from around the world urged the CEOs of 25 banks not to participate in loans to fund the construction of the world’s longest heated crude oil pipeline.

In an open letter, organizations from 49 countries, including 122 African-based organizations, detail the immense threats that the 1,445-kilometer-long East African Crude Oil Pipeline (EACOP) would pose to local communities, water supplies, and biodiversity in Uganda, Tanzania, Democratic Republic of Congo and Kenya.

They also warn that the pipeline – proposed by French oil company Total and the China National Offshore Oil Corporation – will fuel climate change by transporting oil that will generate over 34 million tons of carbon emissions each year.

The letter to the three banks acting as financial advisors for the project –Standard Bank, Sumitomo Mitsui Banking Corporation, and Industrial and Commercial Bank of China – and 22 banks that have recently provided finance to Total and CNOOC, comes as speculation mounts that a Final Investment Decision (FID), which would commit Total to mobilize capital for the project, is imminent.

Nearly a third of the pipeline will run through the basin of Africa’s largest lake, Lake Victoria – which more than 40 million people depend on for water and food production. It will also cross more than 200 rivers, run through thousands of farms and cut through vital wildlife reserves.

The pipeline is expected to cost around $3.5 billion. Of this, about $2.5 billion will be borrowed from banks and other financiers. It is not yet clear which banks intend to participate, although the three banks acting as financial advisors are likely to join and act as lead arrangers. The UK’s Export Credit Agency, UK Export Finance has also confirmed that it has been approached for a project loan, although the agency is consulting on timing around a recent announcement to end finance for fossil fuel projects overseas.

The 263 organizations are demanding that Total provides full and fair compensation to communities already affected by the project, and are calling on banks to publicly rule out providing any funding to the construction of the pipeline and work with governments and other financiers to promote a sustainable energy future for East Africa based on clean alternatives instead of oil.

Speaking on behalf of AFIEGO, Diana Nabiruma said: “In light of the climate change crisis, many countries have made commitments to clean up their energy systems by promoting renewable energy. Oil companies including Total, the lead proponent of the EACOP project, have increased investment in renewable energy as they realise that this is the energy of the future. Knowing this, why would they seek to saddle Ugandans and Tanzanians with the EACOP? No responsible bank should finance the EACOP project well knowing that the economic, environmental, climate change and social risks of the project are too immense.”

Bantu Lukambo, Director of the Congolese NGO Innovation for the Development and Protection of the Environment (IDPE) said: “Pollution has no boundaries, any environmental impact triggered by the EACOP pipeline will affect not only wildlife and communities but will threaten also the stability in the region, with possible oil spills in some of the last remaining water reservoirs of the Great African Lakes, fuelling disputes between countries.”

Environmentalist and 350.org founder Bill McKibben said: “This project is like something from a completely different era, fifty or seventy-five years ago when we knew nothing about climate change, were still in the grip of colonialism, and didn’t understand that the other species we shared the earth with were beginning to disappear. In 2021, the EACOP is a metaphor for ecological, social, political and humanitarian ignorance.”

David Pred, Executive Director of Inclusive Development International said: “It is difficult to conceive of a more dangerous project at a more perilous moment for the planet than the EACOP. The good news is that it’s not too late to stop this project and the global warming calamity that it would accelerate. The big banks we’ve written to today have it within their power to stop destructive projects like EACOP in their tracks.”

Ryan Brightwell, Researcher and Editor at BankTrack commented: “Banks have been made aware of the tremendous risks posed by this pipeline, and they have been made aware of the groundswell of opposition from communities and civil society locally and internationally. Any bank that chooses to finance the EACOP in the face of this opposition will show itself to be among the most irresponsible in the industry. Banks linked to this project or to its backers need to respond and make clear that they will not get involved.”

Landry Ninteretse, the 350 Africa Regional Director said: “At a time when the international scientific community is telling us that the world cannot absorb any new fossil fuel developments if we are to tackle the climate crisis, the EACOP that threatens to destroy the livelihoods of tens of thousands of people, while affecting a great portion of diverse ecosystems with incomparable biodiversity is still being conceived. Financiers need to be on the right side of history and should be focused on green projects which will positively transform East Africa’s economies for future generations.”

Save Virunga co-founder Christine Lain commented: “This pipeline is a nightmare – it could open up critical habitats in the region to oil exploration and exploitation. A great amount of effort has been made by local civil society and the international community to stop oil exploration in the Greater Virunga landscape that stretches over Uganda and DRC and covers many critical protected areas such as Queen Elizabeth National park and Virunga National Park, and sustains the livelihoods of cross border fishermen communities. If the EACOP pipeline comes, all this effort will be at risk, it will push for the reopening and allocation of new oil licensing rounds in these key protected areas.”

The open letter was launched alongside a new campaign website for the global #StopEACOP coalition – stopeacop.net. The website will keep track of financial institutions, investors and insurers that have ruled out support for the project and will serve as a campaign hub for further public actions targeting the project’s developers and financial backers.

The open letter can be downloaded here.

A Finance Risk Briefing on the EACOP project from November 2020 can be found here.