Calling on car companies to address the human rights impact of aluminum production in their supply chains.

With the world embracing better and cleaner technologies to combat climate change, the market for low-emission and electric cars is set to boom. This is driving a massive demand for aluminum, which is used to make lighter weight vehicles.

Inclusive Development International has partnered with Human Rights Watch to look under the hood of the global automobile industry and assess how it is tackling the impacts of aluminum production on local communities.  We are calling on car companies to do much more to lift environmental and social standards for this industry and stop sourcing from mines and smelters that don’t respect human rights. 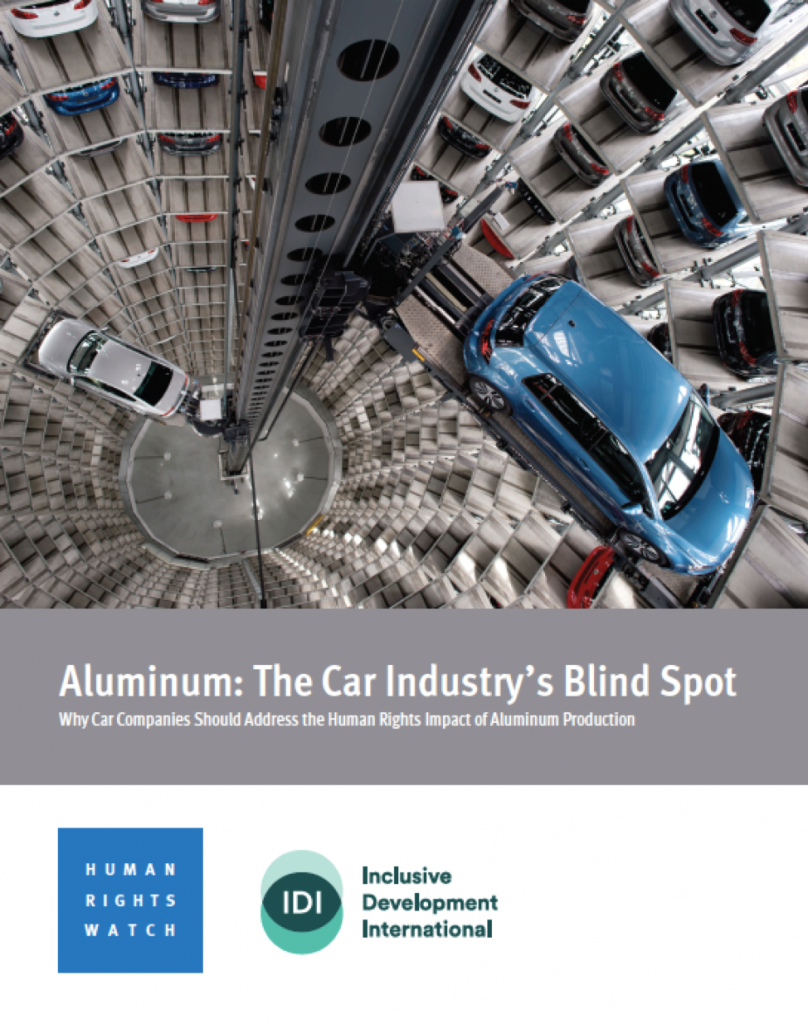 Human rights impacts of aluminum production are a blind spot for the car industry.  Read our report on how car companies can drive up standards at mines, refineries and smelters.

Because bauxite mines involve surface level mining, they often destroy huge swathes of forests and farmland, which underpins the livelihoods of local communities.  Bauxite mines can also have a devastating impact on rivers and groundwater sources that people rely on for drinking and irrigation.

In Guinea, the West African country with the world’s largest bauxite deposits, a government study forecasts that over the next 20 years bauxite mining boom will remove 858 square kilometers of agricultural land and destroy more than 4,700 square kilometers of natural habitat, an area six times bigger than New York City.

That’s frightening news for the hundreds of thousands of small-scale farmers living in Guinea’s bauxite mining region.  If mining companies don’t start respecting their land rights, paying them fairly for the use of their land and then rehabilitating and returning it once they are finished mining, these communities will be thrust into inter-generational poverty.

Using examples from around the world and an in-depth case study of bauxite mining in Guinea, our joint report with Human Rights Watch shines a spotlight on these and other human rights consequences of the aluminum industry.  It assesses how the global automobile industry is addressing the impacts of aluminum production, based on a year of dialogue with nine major car manufacturers – BMW, Daimler, Ford, General Motors, Groupe PSA, Renault, Toyota, Volkswagen, and Volvo.

Although many of the world’s leading car companies have publicly committed to addressing human rights abuses in their supply chains, we found that most car companies have so far done little to map out the mines, refineries, and smelters that they source from and evaluate and address the negative human rights impacts of aluminum production.

Given the importance of aluminum to the car industry’s future, we have provided car companies with a roadmap to ensure that their aluminum is free from human rights abuses.

We can’t build a better future for some people at the expense of others - when it comes to creating a fair and emissions-free global economy we have to recognize that we’re all in it together.

The good news is the car brands that sit on top of these global supply chains wield incredible clout within the industry and have the purchasing power to drive change.

Although the car industry as a whole has made limited efforts to source aluminum responsibly, several car companies have sought to promote responsible sourcing by joining an industry-led certification scheme, the Aluminum Stewardship Initiative (ASI). This initiative uses third-party audits to assess mines, refineries and smelters against a Performance Standard that includes human rights and environmental factors. The car manufacturers are encouraging bauxite mining companies and aluminum producers to join ASI and expand the amount of certified aluminum available for purchase.

Like so many similar certification initiatives, however, ASI’s standards and audit process are lacking, despite having recently undergone an in-depth review resulting in new standards adopted in May 2022. As part of that process, we submitted detailed comments highlighting key weaknesses. These included the need for assessment criteria to focus on outcomes for affected communities and the environment rather than only the policies and processes the companies have in place, and to require that companies remediate adverse impacts that their mining and production activities have already caused (often referred to as “legacy impacts”). We also emphasized the importance of meaningful opportunities for participation of affected communities so they can express their views and experiences as part of the audit process and have their views reflected in audit reports, which should be comprehensive and made publicly available. As a result of our recommendations, the new standards have some improvements, including a requirement that all audits involve interviews with affected people, but remain weak in many respects.

Recognizing the ongoing shortcomings in ASI’s certification process, we have continued our advocacy, emphasizing that until improvements are made, car companies cannot rely on ASI to effectively evaluate human rights risks in their aluminum supply chains. Car companies should also understand that sourcing certified aluminum does not on its own fulfill their responsibility to address human rights risks in supply chains. Sourcing certified aluminum should only ever be one part of a broader due diligence process that includes supply chain mapping and public disclosure, risk analysis, grievance mechanisms, and direct engagement with mines, refineries, and smelters implicated in human rights abuses.

Some car companies have, since being contacted by Inclusive Development International and Human Rights Watch, begun to take these steps.

Drive Sustainability, a coalition of 11 car companies that includes BMW, Daimler, Ford, Toyota, Volkswagen, and Volvo, in May 2021 initiated a project to assess the human rights risks inherent in aluminum supply chains and those of nine other raw materials, which it said could presage collective action by the auto industry to drive up standards in supply chains.   In January 2021, Drive Sustainability also wrote to The Aluminum Association, an association of dozens of aluminum producers, in order “to express concern about the situation in Guinea,” to solicit information on members’ human rights due diligence efforts, and to express support for an ongoing mediation between a Guinean mining company and 13 impacted communities.

Several car companies, including Volkswagen, have contacted CBG directly, as well as its co-owners, Alcoa, Dadco, and Rio Tinto, to ask them to participate constructively in the mediation.

BMW has also said publicly that if bauxite mining occurs in Ghana’s Atewa Forest in contravention of Ghana’s obligations under the United Nations Convention on Biological Diversity and the Paris Agreement on Climate Change, BMW will not accept aluminum in its supply chain originating from the forest.

What the Car Industry Should Do

These positive steps should be the start of a wider effort by car companies to address the human rights impacts of aluminum production. Car companies should begin by ensuring that binding human rights and environmental standards are integrated into their procurement contracts and should require suppliers to integrate similar language into contracts throughout the supply chain.

Car manufacturers cannot, however, rely only on their suppliers to enforce human rights and environmental standards.  Here are the other steps that we are calling on them to take:

Inclusive Development International will continue to challenge the companies that are failing to meet their human rights responsibilities.  The community complaint we are supporting against Compagnie des Bauxites de Guinée (CBG) is a prime example. This huge mine – a joint venture of three multinational aluminum producers, Rio Tinto, Alcoa and Dadco – is having a devastating impact on tens of thousands of local farmers, who, despite the fortune being extracted from their ancestral land, are literally being left in the dust.

After lodging a complaint to the International Finance Corporation’s Compliance Advisor Ombudsman on behalf of 13 affected villages, we are currently accompanying the communities in a formal mediation process with the company.

With your help we’ll drive real change in the aluminum industry and for the communities in Guinea by:

Aluminum: The Car Industry’s Blind Spot: Read our report on how car companies can drive up standards at mines, refineries and smelters.

Stop #ESGreenwashing: Demanding that responsible investment does what it says