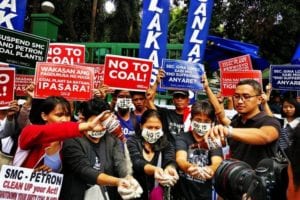 (October 17, 2019) – The International Finance Corporation’s independent watchdog has announced that it will launch a compliance investigation into the World Bank Group member for its investments in a commercial bank in the Philippines that bankrolled the country’s recent coal power boom. After receiving $254 million in IFC funds, Rizal Commercial Banking Corporation became a key financier of the coal industry in the island nation, one of the world’s most vulnerable countries to climate change, despite a 2013 World Bank moratorium on financing coal in most cases.

The enquiry will examine whether the IFC violated its social and environmental rules when its client, Rizal Commercial Banking Corporation, participated in loans worth hundreds of millions of dollars to build or expand 11 coal-fired power plants. This will be the first investigation ever undertaken by the watchdog, the Compliance Advisor Ombudsman (CAO), to specifically examine IFC’s contribution to climate change through its indirect investments in fossil fuels.

The investigation comes two years after more than 120 citizen groups and communities in the Philippines filed a class action-style complaint against the IFC with the CAO. The complaint was led by the Philippines Movement for Climate Justice, with support from Inclusive Development International and Bank Information Center Europe.

"We welcome the CAO’s decision to proceed with the compliance review. The World Bank’s commitment to stop financing coal remains hollow until the IFC stops funding it indirectly through financial-sector clients. In the face of our climate emergency, which disproportionately affects the people of the Philippines, the World Bank must walk the talk on coal or get out of energy altogether," said Aaron Pedrosa of the Philippine Movement for Climate Justice.

After accepting the complaint, the CAO conducted an assessment to determine whether an agreement could be reached between any of complainant groups and the plants’ developers, a range of Philippine conglomerates and energy companies, to enter into a dispute resolution process facilitated by the Ombudsman. When no such agreement was reached, the complaint was transferred to CAO’s compliance function, which determined that there are “substantial concerns” regarding the environmental and social impacts of IFC’s investment, warranting a full compliance investigation.

In recent years, the IFC has outsourced more than half of its budget to commercial banks and other financial intermediaries, which have invested the IFC’s money onward, often with little apparent oversight. Many of these IFC financial intermediaries are significant financiers of the fossil fuel industry, in particular coal power plants and mines, according to an investigation by Inclusive Development International.

Meanwhile, the warnings from climate scientists have become increasingly dire that the window to limit the rise in global average temperature to 1.5 degrees Celsius above pre-industrial levels and avoid the most catastrophic climate change scenarios is rapidly closing.  Central to addressing this crisis is energy system transformation. Carbon-polluting fuels like coal need to be phased out and replaced with clean and safe renewable energy.

In response to the Philippines complaint and the intensifying public scrutiny of the World Bank Group’s indirect investments in fossil fuels, IFC is expected to soon unveil its new Green Equity Strategy.  The strategy aims to support the banking sector to mobilize the $23 trillion in debt financing that IFC estimates is necessary to finance the transition to clean energy, while requiring the 20% of financial institutions in which it holds equity, such as Rizal bank in the Philippines, to phase out all of their exposure to coal-related activities by 2030.

“We are pleased to see IFC taking this important step to close the $20 billion-dollar financial intermediary loophole in the World Bank’s 2013 pledge to stop funding coal,” said David Pred, Executive Director of Inclusive Development International.  “The next step will be to extend the coal-exit requirements to the IFC’s debt clients as well, which make up 80 percent of its overall financial sector portfolio.  With debt investments in over 700 commercial banks around the world, such a move could be truly transformational.”

Kate Geary, Co-Director of BIC Europe said, “In this time of climate crisis, there is no justification for publicly-funded banks to continue propping up the dirty and outdated fossil fuel industry. We’ll be joining our Philippines colleagues and youth protesters in a climate strike outside the World Bank on Friday 18 October to call for banks to stop finance for fossils.”

The full complaint is available here:

‘Disaster for Us and the Planet’:  How the IFC is Quietly Funding a Coal Boom, Inclusive Development International et al, October 2016