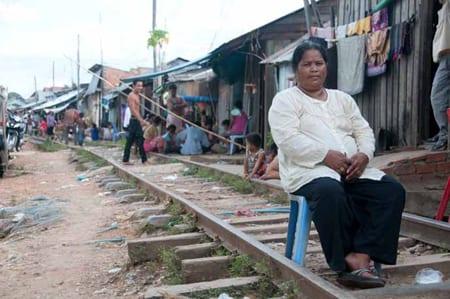 (Manila) – Families threatened by the Asian Development Bank-financed project to redevelop Cambodia’s railway have once again filed a complaint to the bank’s Compliance Review Panel about the controversial project.

The Railway Rehabilitation Project has impacted approximately 18,000 people living alongside Cambodia’s 642-kilometers of dilapidated railway tracks.   At least 1200 families, encompassing approximately 5160 people, were required to move to project-sponsored resettlement sites, while the rest were made to cut the portion of their land, houses and shops that lay within the 3.5 meter “corridor of impact” and allowed to remain in the residual railway right-of-way for at least five years.

After receiving a complaint from affected families in 2012, the Compliance Review Panel conducted a 17-month investigation, which concluded that many of those who were relocated were impoverished by an ill-conceived resettlement process that failed to provide adequate compensation, infrastructure at resettlement sites and assistance to restore lost incomes and livelihoods.

Yet, hundreds of families in Phnom Penh and Poipet who were considered “partially-affected” and allowed to remain temporarily in the right-of-way have found themselves living in cramped conditions – many with less than 30 square meters of living space – and no security that they won’t be forcibly evicted in the future. Other families still remain in the corridor of impact and refuse to move the resettlement site some 20-kilometers away from their current homes, where they have seen their former neighbors driven into destitution.

Frustrated by a lack of attention from the Asian Development Bank (ADB) to their plight, 22 affected people requested a new investigation by the Compliance Review Panel this week.

“We have been waiting since 2006 to be meaningfully consulted on resettlement options that will not make our lives worse off,” said Sim Pov, one of the complainants who traveled to Manila this week to present the complaint to the ADB Board of Directors. “We cannot remain where we are and we will not go somewhere where we will become poorer. We understand that this is our right under international law and the ADB’s policies,” he added.

The original 2006 Resettlement Plan committed to ensuring that relocation sites would be no more than 5 kilometers from affected households’ current residences. It also identified three potential relocation sites for affected people living along the Phnom Penh section of the railway. Yet, in 2010 ADB ignored the concerns raised by affected households and non-governmental organizations monitoring the resettlement process and approved an updated plan that dropped the two closest sites, leaving as the only option the notorious Trapeang Anhchanh site, some 20 kilometers outside the city-center.

“Trapeang Anhchanh has long been a human dumping ground for poor people who have been forcibly evicted to make way for the exclusive development of Phnom Penh,” said David Pred, Managing Director of Inclusive Development International, who has been monitoring the Railway Project resettlement process since 2010. “We warned ADB at the time that moving people to this place, where there are no jobs or opportunities, would be a social disaster. They didn’t listen to us and sadly the disaster unfolded just as we predicted.”

“I don’t want to move to Trapeang Anhchanh because I have seen the difficult situation that my former neighbors who moved there have faced,” said Keang Si Yong, one of the complainants. “Their children cannot go to school. They’ve lost their jobs and can’t do any business.  They’re in huge debt and their lives have become worse and worse.  An agency whose mission is to fight poverty should not force us to accept this fate,” she added.

“It is unfortunate that it will probably take another scathing compliance investigation to get ADB to follow its policies and ensure that these families are resettled properly,” said Eang Vuthy, Executive Director of Equitable Cambodia, whose organization is assisting the complainants. “But the communities have tried for years to have an honest dialogue with ADB and the Government about adequate resettlement and the door has consistently remained closed. Hopefully, this new complaint will help pry the door open at last.”

More information about the Cambodia Railway project can be found here.