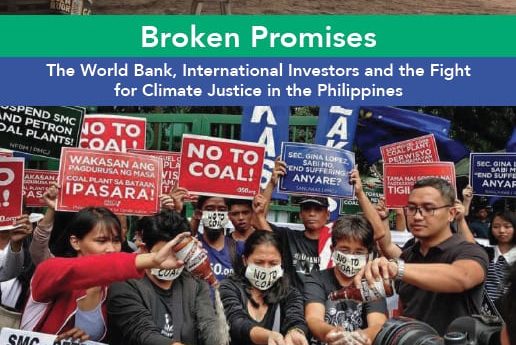 International investors have in recent years poured billions of dollars into coal-fired power plants in the Philippines, one of the world’s most vulnerable countries to climate change. The World Bank Group, commercial banks and asset managers have quietly bankrolled a coal boom on the island nation despite many of them pledging to end or cut their funding for fossil fuels, according to a report released today by Inclusive Development International, Bank Information Center Europe and the Philippine Movement for Climate Justice.

The boom in new carbon-polluting coal plants in the Philippines threatens to derail international efforts to limit global temperature rise to below 1.5°C above pre-industrial levels, which scientists believe is necessary to stave off the most catastrophic impacts of climate change. In addition to making the Philippines even more vulnerable to climate change, the coal projects havecaused forced displacement and dangerous air and water pollution, among other impacts. Environmental defenders opposing the projects have been threatened, harassed and even murdered, according to the report.

“These investors are complicit in putting our country and communities at risk at a time when addressing climate change is the order of the day,” said Aaron Pedrosa of the Philippine Movement for Climate Justice.

The report details how the World Bank Group’s International Finance Corporation (IFC) has funneled money into coal through opaque investments in two financial intermediaries, Rizal Commercial Banking Corporation and BDO Unibank. After receiving more than half a billion dollars in funding from the IFC, these banks went on to participate in $24.2 billion of financing for coal.

In October, more than 100 citizen groups and affected communities in the Philippines filed a historic complaint with the IFC’s watchdog, the Compliance Advisor Ombudsman, demanding that the World Bank Group member be held accountable for its contribution to global warming. The complaint, which centered on Rizal bank’s funding of new and planned coal projects, was deemed eligible by the Ombudsman last month. The watchdog will now commence an investigation of the IFC’s compliance with its policies to protect people and the environment and the adequacy of those policies to address the root causes of global warming.

“If the World Bank Group is going to continue to use commercial banks as proxies, then it must require those banks to make the same commitment that it has made to stop financing fossil fuels, and instead build the low-carbon economy that we need to save the planet,” said David Pred, Executive Director of Inclusive Development International.

A who’s who of the global financial system has joined the IFC in supporting coal in the country. Commercial banks such as Standard Chartered and ING, along with asset managers including BlackRock and Norway’s sovereign wealth fund, have poured billions into the sector despite making much-lauded anti-coal commitments.

The report is part of the Big Shift Global campaign, which is calling on the World Bank to pull its money out of fossil fuels and redirect funds to affordable renewable energy. The World Bank Group’s Energy Policy from 2013 forbids investments in coal projects, except in rare circumstances, but the bank has not applied the policy to its investments in financial institutions, which now make up more than half of the IFC’s business.

“The IFC is flouting the World Bank’s Energy Policy by funding financial intermediaries that have gone on to finance dozens of risky coal plants around the world. It is time for the IFC to close this loophole and stop indirectly backing projects that push the planet to the brink of climate disaster,” said Nezir Sinani, Director of Bank Information Center Europe.

The report is available at:

Broken Promises: The World Bank, International Investors and the Fight for Climate Justice in the Philippines