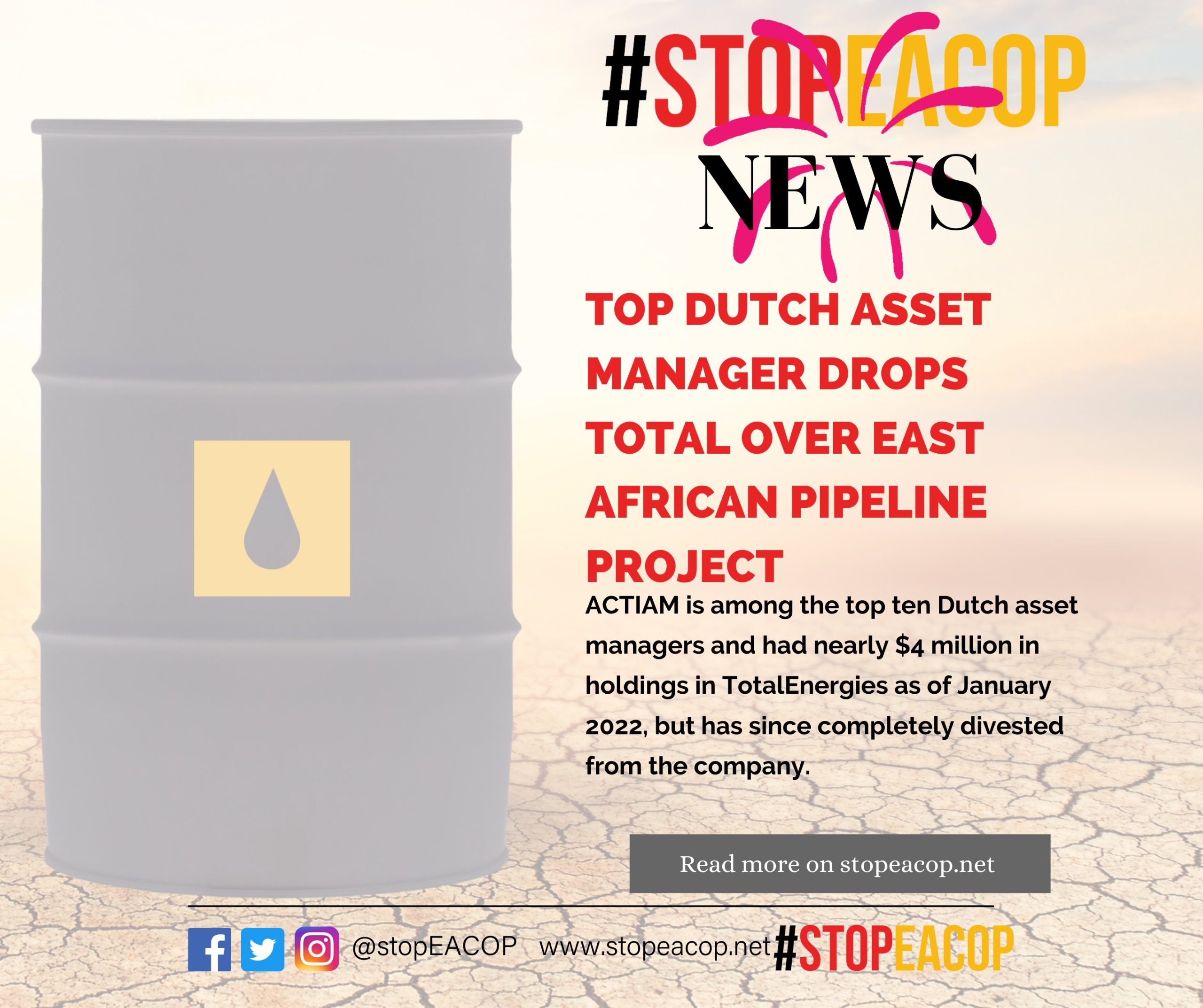 Dutch asset management company, ACTIAM, confirmed this week in an interview with The Guardian that it pulled all investments from TotalEnergies and placed the company on an exclusion list over concerns about its controversial East African Crude Oil Pipeline (EACOP) project. ACTIAM is among the top ten Dutch asset managers and had nearly $4 million in holdings in TotalEnergies as of January 2022, but has since completely divested from the company.

“TotalEnergies used to be our favourite company in the sector,” ACTIAM’s Dennis van der Putten told the newspaper. “It’s with pain in our heart that we decided to exclude them. But we had to do it, from our sustainability point of view.”

ACTIAM’s decision to pull its investment followed months of attempted dialogue with TotalEnergies over the company’s failure to mitigate severe environmental and social risks posed by the project, such as concerns related to the handling of toxic waste and the risk of pollution to critical water supplies in Uganda and Tanzania. ACTIAM’s head of responsible investment, Greta Fearman, underlined in her interview with the Guardian the absurdity of the French oil major’s approach to biodiversity conservation, “that if you lose biodiversity somewhere, just compensate elsewhere, by supporting conservation programs in other parts of Africa.”

The divestment also comes amidst increasing public opposition to the planned pipeline and associated oil fields. Critics include well-known Ugandan climate activist Vanessa Nakate and over 260 organizations that are part of the #StopEACOP campaign, a coalition led by an alliance of East African groups and communities that oppose the 1,443-kilometer heated pipeline, which has already displaced thousands and threatens the water resources and livelihoods of millions of people, as well as wildlife and biodiversity. Banks and insurance companies have already abandoned the project in droves, though notable holdouts include Lloyd’s of London and South Africa’s Standard Bank.

“Communities in Uganda and Tanzania have been fighting this pipeline for a long time. People are finally starting to listen and we have no intention of letting up,” said Omar Elmawi, Coordinator of the #StopEACOP campaign. “It won’t be easy, but Total could still secure the funding it needs to move forward, so we are going to be doing our best to keep that from happening.”

“It is clear that EACOP benefits only TotalEnergies and China National Offshore Oil Company while it will significantly affect Uganda and my country Tanzania,” Stated Baraka Lenga, a climate change and livelihood expert from Tanzania. “Being involved with TotalEnergies as shareholder, insurer or financier is being an accomplice to the social, environmental and livelihood harms that EACOP will have to our beloved countries”

“We hope and expect ACTIAM’s decision to abandon Total is a harbinger of what’s to come,” said Coleen Scott, Legal and Policy Associate with Inclusive Development International, a human rights research and advocacy organization working with the #StopEACOP campaign. “More and more people are realizing that the EACOP project is a terrible investment – for the planet, for the people of Uganda and Tanzania, and from a financial perspective.”

“ACTIAM said that EACOP “rang alarm bells” for them and their decision is to be commended as an example of what responsible investment leadership looks like. We have initiated dialogue with other Dutch pension funds and asset managers on the human rights and environmental abuses occurring around EACOP and we call on them to follow ACTIAM’s lead in excluding TotalEnergies,¨ said Cindy Coltman, Senior Policy Officer with Both ENDS in Amsterdam.